It was our 13th Anniversary on Monday so we both took the day off. We couldn’t quite decided where to go so in the end plumped for a lunch out in Aberystwyth followed by some retail therapy and a nice dinner at home. So after seeing Morgan off to school we had a slow start to the day and then headed into Aberystwyth for lunch.

We thought The Glengower would be nice. The food is good and it probably wouldn’t be too busy on a Monday lunch time so that’s where we headed. We arrived at 11:56 feeling hungry and looking forward to a burger. The lights were on, the TV screens were on and the doors were wide open. However, as we went in we were followed by someone else who rudely told us that they weren’t open until 12 so we shouldn’t be in there and were asked to leave.

We were a little shocked really, not only was he rude but he was kicking us out as we were 4 minutes early! Surely he would have been better off saying something along the lines of  ‘sorry we can’t serve you yet as we don’t open until 12 but here’s a menu for you to take a look through for a few minutes’. Or even ‘ sorry, we’re not open until 12, can you pop back then?’

Nope, we were just kicked out. We quickly decided not to bother with The Glen. Instead we wandered back into town thinking of other places to eat. We decided the [email protected] would be good but when we got there it was closed on Mondays. We therefore wandered up the High Street thinking of somewhere else. In the end I remembered that I’d heard good things about Agnelli’s at the top of town so we headed there.

This photo of Agnelli’s Trattoria & Deli is courtesy of TripAdvisor

Agnelli’s is a tiny little Italian cafÃ© / shop but there were stairs leading downstairs to what is presumably more seating. We sat upstairs in the window though and soon ordered our lunch. I had Tuscan Sausages while Anna had Spaghetti al Pollo and both were delicious. The sausages were just what I needed, rich and filling and very tasty. We finished our meal off with lovely creamy cappuccinos and a selection of crunchy crisp pastries. These were only 80p each so we shared a selection of them. Nutella, Lemon, Coffee and Pistachio ones. Mmm Mmm!

Next we headed out to Parc y Llyn for a wander around some of the shops and bought some new plants for the garden. There were one or two bare patches that I wanted to fill in. Forget-me-Nots and Poached Egg Plants had filled these spaces earlier in the year but they looked as though they could do with something else now. I planted them out and took a few cuttings from them once we got home later in the day. 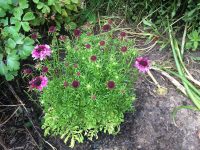 
Elsewhere the garden is looking nice too and the bees were buzzing. 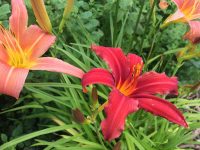 We also popped in to M&S to buy a few things for Anna, some socks for Morgan and  a ‘dine in for £10 meal for two’ for the evening. Mind you, come the evening we still weren’t that hungry thanks to our meal in Agnellis so we decided to save that for another day.

Not the most exciting anniversary day, but it was nice to have a quiet day together.