In addition to my first ever Quadrathlon in North Lincolnshire at the weekend we tagged on a family holiday in the Campervan as well. We’d never been to Lincolnshire before and this was to be our first extended camper trip too.

The race was on the Sunday so we drove up on Saturday morning and arrived at a little campsite in the mid afternoon. The campsite was lovely, just us in our campervan and about 7 other caravans dotted around the little field. There was a very clean toilet and shower block, electric hookups and that was about it. We were warmly welcomed and shown around by the owners and then settled into our little spot on the Acorn Wood Camp Site.

The field was surrounded by trees. Trees that were full of birdsong and the cooing of wood pigeons. At our end of the campsite the trees extended out into a little woodland full of luxuriant green undergrowth and spindly trees. There was a short walkway through it that led to a fishing lake owned by the caravan site. It was a perfect little private hideaway and the fishermen seemed to love it. A million miles away from the hustle and bustle of the real world and a relief after several hours on Britain’s Motorways.

We had decided to try attaching the awning that we had bought for our tent to the campervan. We set it up and simply pulled the elasticated end over the top of the van, covering the surf ski and quiver-rack that was on the roof rack. We then pegged the two ties down on the far side of the van. It worked perfectly. We now had a covered area outside the van. We could have the camper open even in the rain and stay perfectly dry. With a groundsheet laid out under the awning we also had a nice covered area where we could set up chairs, a table and a stove for outdoor cooking. All of this freed up room in the camper and of course meant that the camper stayed cleaner and tidier. It worked really well and saves us having to buy a bespoke awning. 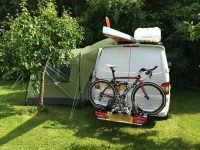 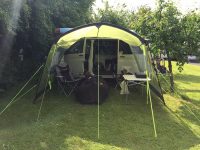 We settled in and went for a little stroll to the fishing lake. We hadn’t brought any fishing kit with us so we were merely onlookers rather than hardcore fishermen. The lake was more of a pond really but it had several areas for fishing from and an island in the middle with a big weeping willow tree on it. Ducks and ducklings were floating on it’s still waters and the air was alive with insects. 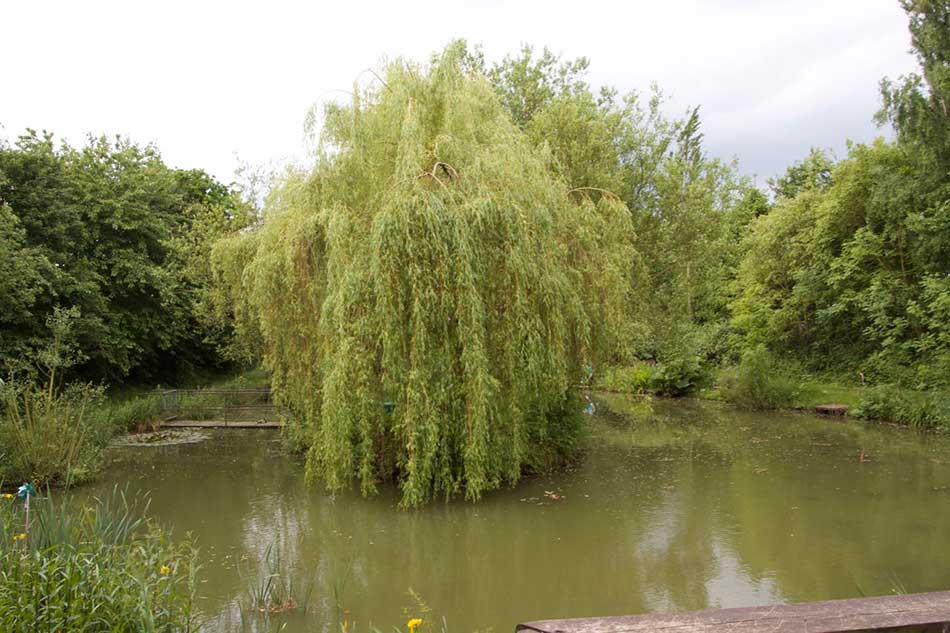 The far end of the pond was less open and full of vegetation but we could see several largish carp in here. There were people out fishing in the sunshine. Bugs and butterflies were fluttering from flower to flower in this little wildlife haven. One end of the pond was overlooked by a ‘fisherman’s lodge’. A lovely little wooden cabin fitted out with comfy sofas, a kettle complete with free tea and coffee and lots of books and magazines to read.

View from the lodge

I’m not sure if this lodge was for the fishermen to retire to during inclement weather or for fishermen’s wives to while away the days. Both I suspect and I could just imagine the fishermen sheltering in here munching on corned beef sandwiches and relating stories of the ‘one that got away’ while a thunderstorm raged outside and their bait was nibbled by curious carp. I’m sure my Dad would have loved this spot and maybe my Mum could sit in the lodge knitting and drinking tea while my Dad sat on the bank catching carp. I don’t know why more fishing lakes don’t have a little lodge like this.

We didn’t have long to wait to experience the thunderstorms ourselves as the skies soon darkened and it started to rain. We headed back to the camper just as an ice cream van pulled up onto the site. We of course couldn’t resist an ice cream so stood in the queue as the heavens opened. We got soaked waiting for the ice cream to be dispensed, Anna more so than anyone else. We hastily retreated to the safety of the van to eat it. Meanwhile thunder and lightning raged outside.

It soon passed though and dried up enough for Morgan to try out the loungair which for some reason he found hilarious!

Anna had accidentally ordered a Gousto Box just before we went away and we hadn’t had chance to eat it. Some went in the freezer ready for our return home but we had brought one of the meals with us to cook in the camper. It was a nice pancetta and cream tagliatelle. We set to frying the pancetta, chopping garlic, boiling tagliatelle and making a clotted cream, cheese and egg sauce that we topped with freshly chopped chives. Not a bad dinner for campervan cooking. 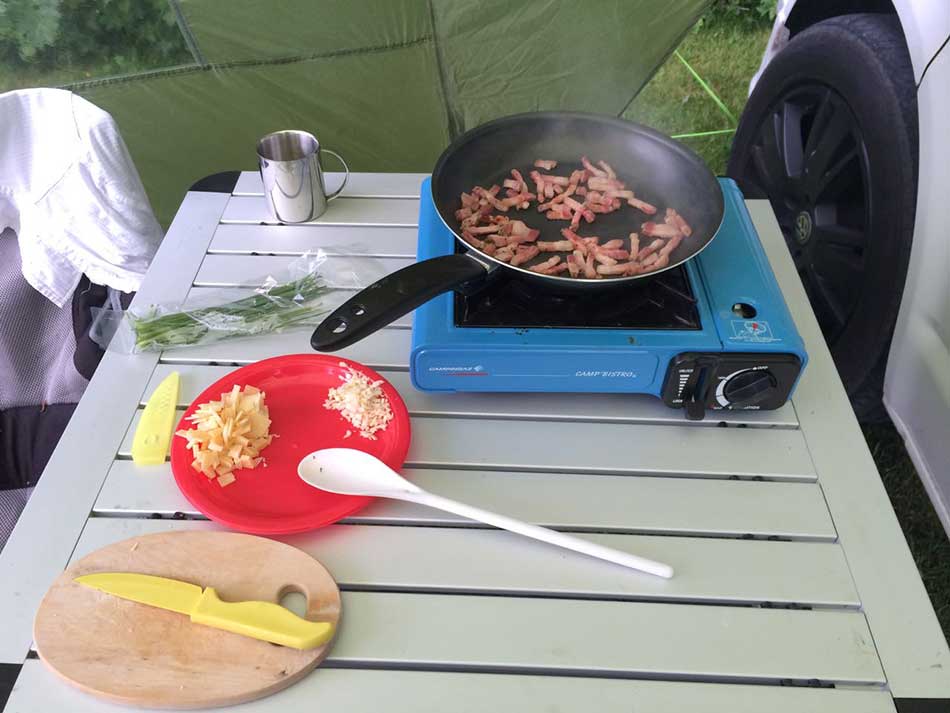 The rest of the evening was spent chilling in and around the camper followed by and early night as we had to be at the leisure centre for my race by 6:30am the following morning. 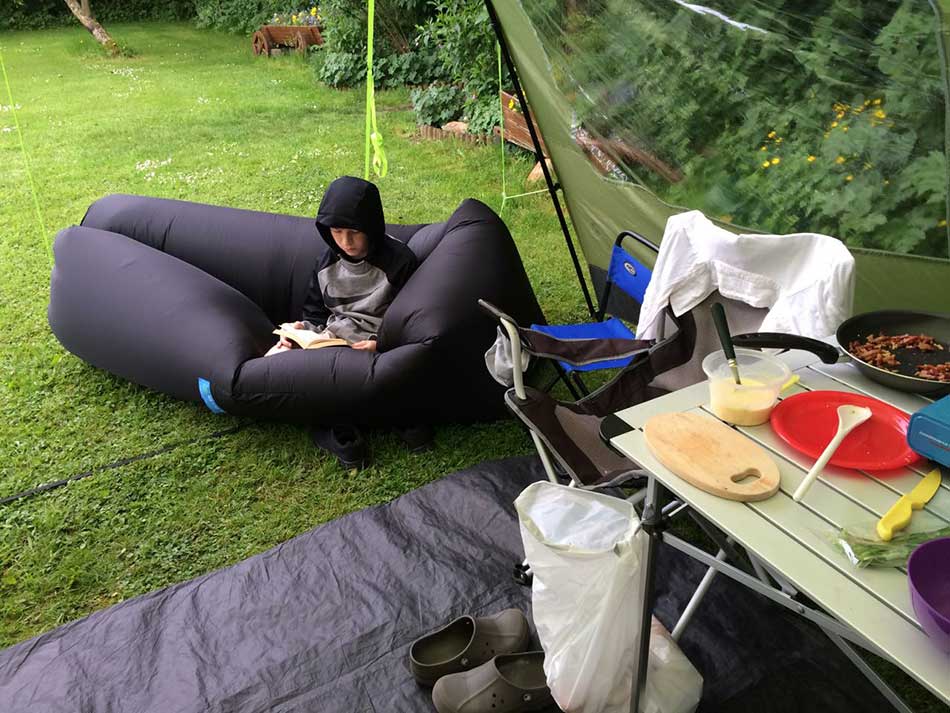 The site was lovely and peaceful. Wood pigeons were the noisiest things cooing from the tree tops and flapping around in the vegetation. Robins visited for scraps and there was birdsong all around. The other campers were all friendly but not overly so and the owners were nice too.

As dusk fell, the fishermen returned from the lake laden down with all of the paraphernalia of fishing. Their waterproof trousers scuffing against each other with every step making the sound of asthmatic exhales. Over their shoulders hung bags full of rods and landing nets in one trip and then back for the rest of their kit. Large boxes with soft padded seats and attachments for holding tubs of assorted bait. Arms for supporting their sinewy rods and drawers full of tackle. All the tools of the trade for catching the cunning carp. It seemed like overkill for such a small pond that was clearly well stocked with easy to catch carp. I guess much of the ‘fun’ comes from having the right kit and being able to play with it under the guise of out-witting the prey. Besides, I’m a fine one to mock when the camper was laden down with a surf ski, a bike, swimming kit, running kit and all manner of other toys!

As the fishermen packed up for the day it was time for us to settled down too. We constructed Morgans Cab Bunk, pulled out our bed and snuggled down onto our comfy mattress topper for the night as darkness fell. You can’t beat a nice camper trip.