The Amazon Fire TV stick popped up on offer the other day and was just too good an offer to miss. The usual price Amazon Fire TV Stick at £34.99 isn’t exactly expensive, but when I noticed it as a Black Friday offer for just £24.99 I decided to take a closer look.

We’ve never really looked at this category of gadget before. We’d had a cursory look at the Apple TV but it didn’t really do anything for us so we weren’t about to spend over £100 on one despite being a house full of Apple fans. We’d looked briefly at Smart TV boxes when buying a digibox a while back as well, but at the time nothing really took our fancy – not anything that we could afford anyway. However, on offer at just £24.99 the Fire TV Stick looked like it was worth a punt. A little more digging and research and it actually seems as though it could be quite a fun little gadget, especially for Christmas.

What is the Amazon Fire TV Stick? 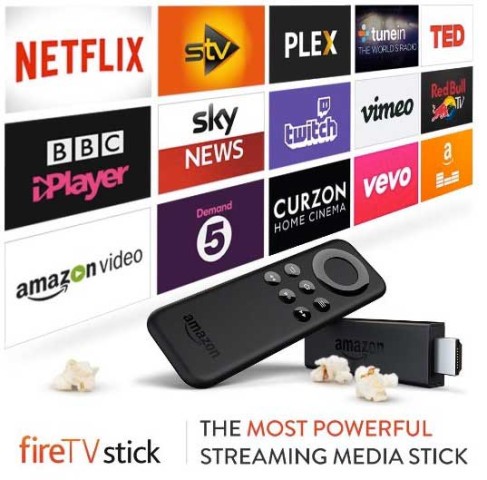 The Amazon Fire TV Stick is essentially a USB wireless dongle that connects to an HDMI port on your TV, turning it into a Smart TV. There’s not much to it, just the dongle itself, a power supply and a remote control. It connects your TV to your Wi-Fi network and from there a whole world of Internet TV. This gives you access to loads of on demand and catch-up TV services such as BBC iPlayer, Demand 5, BBC News, BBC Sport etc.  You can rent videos through it from just £0.99, or even play games on it. If you pay additional subscription fees it also gives you access to lots of subscription services such as Netflix and of course Amazon Prime Video. Such services give you access to a massive selection of digital content – tens of thousands of TV episodes and movies galore.

Here’s a full list of the apps and games available

We aren’t great TV watchers and don’t ever rent movies, but we do occasionally use BBC iPlayer on an iPad so it’ll be nice just to be able to use BBC iPlayer on the TV. We may occasionally rent a film through it and who knows, we might even end up getting an Amazon Prime subscription – which of course is what Amazon want you to do. I’m sure we’ll play a few games, especially over the holidays and Morgan will probably end up watching YouTube and Twitch.TV on it too.

The hardware itself is fairly impressive for the price. It contains 8 GB of storage, 1 GB of RAM, and a dual-core processor which allows for a slick user interface, smooth video playback and buffering of content. At just £24.99 it seemed too good to miss, so it looks as though Santa may be leaving one under the tree for us.

The Amazon Fire TV stick comes with a free 30 day trial of Amazon Prime. Amazon are always trying to sell me an Amazon Prime subscription, touting the fact that I’ll get unlimited next day delivery on all my orders from them. That was never enough of an incentive for me as their delivery is usually pretty good anyway. With the addition of an Amazon Fire TV Stick though that may change. Amazon prime then offers access to Amazon Prime Video, Amazon Prime Music, Amazon Prime Photos and Amazon Cloud Drive all for the princely sum of £79 a year – or if you’re a student you can get a 6 month free trial and then only pay £39 a year.

Amazon Prime Video gives you access to Amazon’s ever growing library of TV shows, movies and exclusive shows created by Amazon Studios. With andAmazon prime subscription and a Fire TV Stick you can stream all of this direct to your TV at no extra cost.

Amazon Prime Music as it’s name suggest allows you to listen to ad-free music from Amazon’s music library, all through your Fire TV Stick and your TV.

An Amazon Prime membership includes unlimited storage in Amazon Cloud Drive for your entire photo collection at no additional cost. Photos or videos can be uploaded to Amazon Cloud Drive and once there they can be viewed on your TV through your Fires TV Stick. I quite like the idea of this.

Whether or not we’ll pay the subscription for Amazon Prime remains to be seen but I’m sure we’ll have a play with it during our free trial. As long as we stream a few movies during our free trial then the Amazon Fire TV stick will have paid for itself. If we end up with a subscription to Amazon Prime then Amazon make some money from us, if not, we’ll use the Fire TV Stick for on demand and catch up services and it’ll be a fun gadget to play with over the Christmas break.