Final Fanfare for our Festive Fish

As our angler fish lantern was such a hit at the Machynlleth lantern parade, we decided to take him along to the Aberystwyth lantern parade as well. The lantern parade in Aberystwyth is associated with the turning on of the Christmas lights and is therefore a festive affair, so we decided that tonight her would be a festive fish. Alan the Angry Angler Fish wasn’t particularly festive though with it’s big googly eyes and razor sharp teeth, but we thought it would be fun anyway and as it was a Friday night, we made it into a Scout activity too.

It would be a shame not to see the festive fish used again and it should be a nice easy but fun Scout activity that gets the Scouts seen contributing to a community event as well. 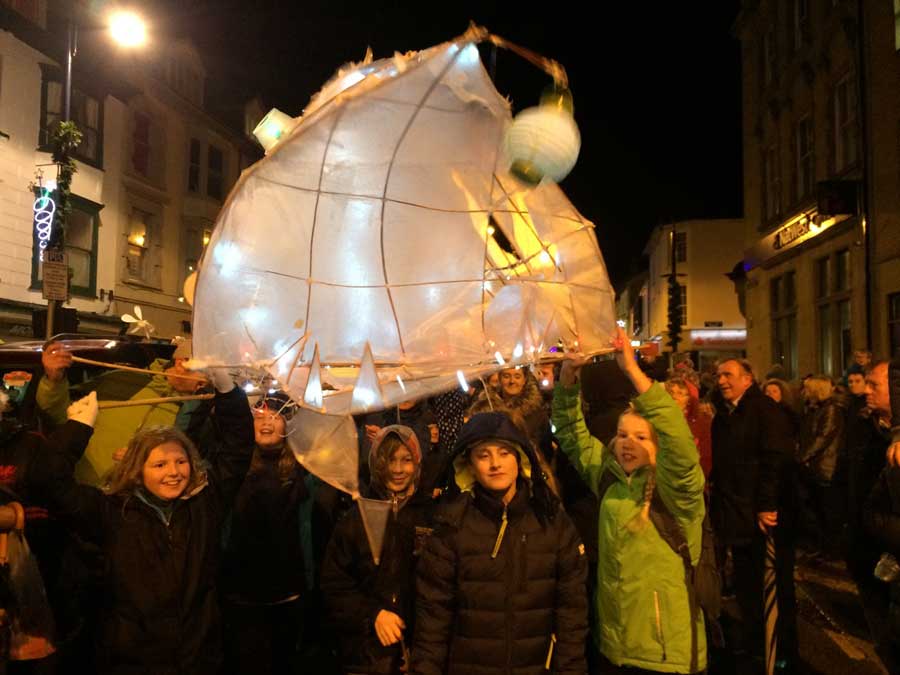 Dave and Sarah stepped in and delivered the festive fish lantern to old college in their van for us on what was an extremely wet and windy Friday night. We made a few running repairs on him and then tried to pick a time to move him the hundred yards or so from Old College to St. Michaels Church. The parade was to start at St. Michaels Church, the Beavers, Cubs and Scouts were meeting us there and more importantly they we serving free hot chocolates, biscuits and mince pies to people in the parade. We waited for the rain to ease and made a dash for it. Unfortunately Alan the Angry Angler Fish wasn’t built for storm force winds. He’s big, he’s light and he’s mainly tissue paper. He was getting ripped to shreds. We managed to squeeze him into the church – he didn’t quite fit through the big double doors but with some squashing he just got through. A couple of the Scouts then set to doing some restorative surgery on him with copious amounts of masking tape. It wouldn’t last long in this weather, but we left them to it as at least a few of them had finally taken ownership of the lantern and not only seemed pleased to see him, but seemed quite excited about showing him off to Aberystwyth.

We had intended on adding a santa hat and some tinsel to make him more of a festive fish, but with a storm raging outside and lots of repairs to do we didn’t have chance for this. 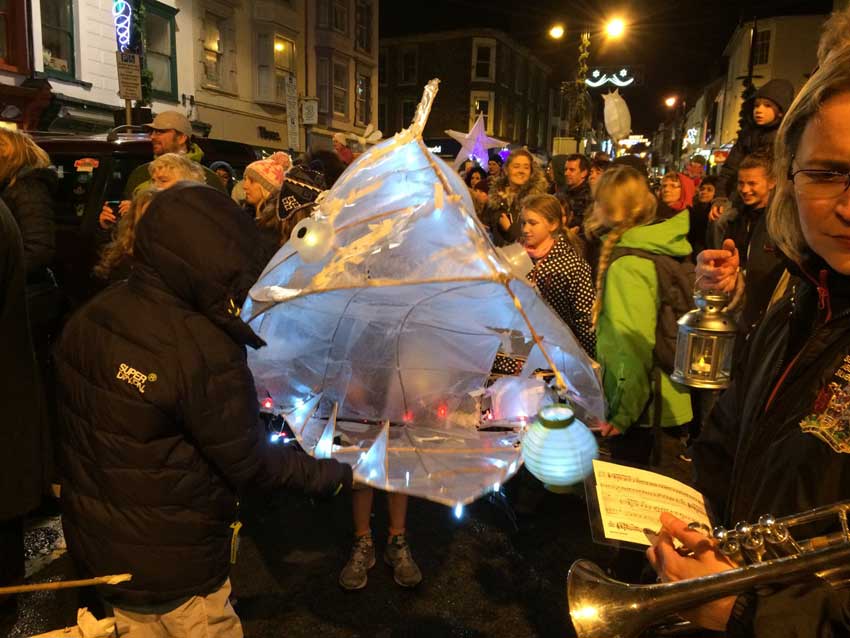 He did somehow take centre stage in the church mind you as he was huge in comparison to all of the other lanterns and there were soon photographers crawling all over him trying to get shots of the giant festive fish lantern. After repairs had been made and hot chocolates drunk it was time to start the parade. First we had to squeeze our lantern back out through the doors of the church and into the wind. At least it had stopped raining now. The photographers wanted a few more photos with various Scouts in them so we posed for a few shots and then the band (complete with Anna playing her cornet) set off through the streets of Aberystwyth with us and the rest of the lanterns following them. 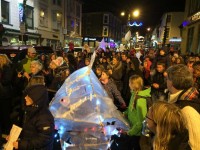 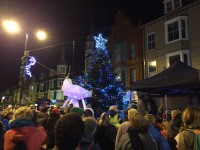 Somehow, despite the wind and the slightly exuberant handling by the excited Scouts, Alan the Angry Angler Fish managed to just about survive to the end of the parade where we all stopped and sang Christmas carols around the tree before the lights were switched on. Our Festive Fish ended up dancing along to most of the carols, with several Scouts sheltering inside of him!

Photos of the Festive Fish

The local professional photographers were out in force so there are plenty of much better photos elsewhere. Keith Morris’s album on Facebook has lots of really nice ones such as these.

With the procession over we headed, the Scouts dispersed with their parents we ‘collapsed’ what was left of our lantern and disposed of it and then headed off to Santa’s Grotto and then KFC for some dinner, before braving a drive along the very wet and windswept seafront on the way home. Another fun evening with the Scouts and it’s beginning to feel like Christmas is on the way.

Death of a Festive Fish