65th Birthday Party and a sunny day in Yate

Another Bank Holiday weekend over and done with, and another busy weekend for us. Immediately after Morgan had finished his race in the Aberystwyth Cycle Fest, we jumped in the car, dropped Morgans bike off at the University and then headed towards my parents house in Gloucestershire.

We arrived in time for dinner and then had a fairly chilled evening with my parents. We were there for my Dad’s 65th birthday party which was to be a meal in the nearby Buthay Inn in Wickwar on Saturday evening, which meant we had most of the day to entertain ourselves. I headed out for an early morning bike ride to Gloucester and back with Mike. It was a nice day for it, light winds, not too warm, but dry and almost sunny!

We were back before 9am though for a second breakfast and then Anna, Morgan and I headed into Yate to do some shopping and for a walk around Kingsgate Park where Morgan played on the climbing frames, we sat and chilled in a hammock and we all walked around the lake and nature reserve enjoying the May sunshine. We found a geocache whilst there as well. 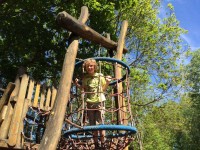 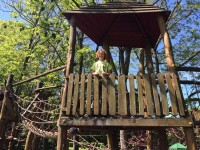 After a picnic lunch on the patio at my parents house we all chilled in the sunshine until it was time to get ready for the party dinner. We all headed into Wickwar where around 30 close family met for an Italian meal at the Buthay. My dad is one of 11 children so we couldn’t fit the entire family in but there were plenty of his brothers there, and of course his children, grand children and great-grandson too. There was a professional photographer in our midst too, so for once I wasn’t called on to take the photos, which means I don’t really have any photos to share here either, other than this one. 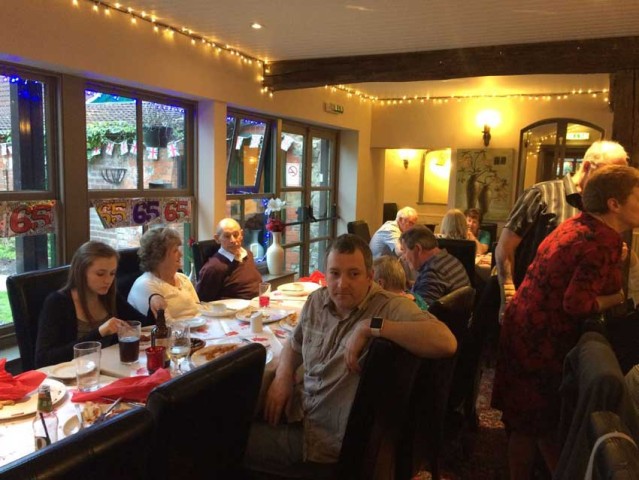 All in all a nice weekend away and we left early on Sunday so as to get back in time for a visit from Morgan’s friend Cameron who was down from Scotland for the weekend, and to prepare ourselves for the Borth Charities Fete on Monday where we were helping to run the kitchen with the Scouts.