I’ve recently enrolled on a Level 2 Cycle Coaching Course with British Cycling and spent the weekend in Ammanford for two days of intensive study towards it. 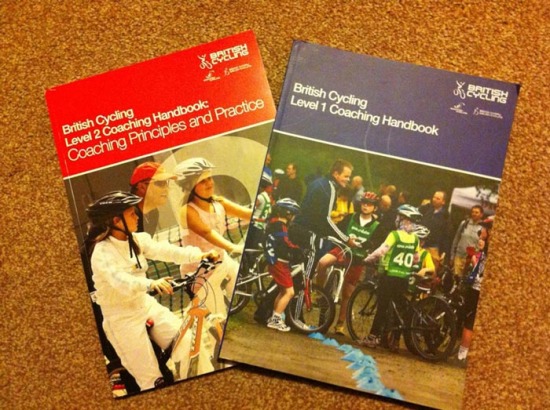 After an early morning drive to Ammanford Leisure Centre I met up with my fellow participants on the course and we were introduced to Will and Mark our tutors for the weekend. After some initial admin it was straight into the course with some presentations from both of them before we headed outside into the pouring rain for some hands on coaching practise. It was fairly full on all day with plenty of stuff to cover and lots of practical hints and tips whilst working outside in the rain.

I stayed down there overnight in a very nice B&B just a few miles away from Ammanford. The owners of the B&B Helen and Steve were very welcoming, providing me with a slice of homemade lemon drizzle cake and a cup of tea when I arrived. After a bit of chat with Helen I headed off for a bit of dinner before settling down into my luxurious room for the evening where I had to write a lesson plan for a coaching session the following day. The room was really nice with en suite shower, a nice big comfortable bed, plenty of space and in addition to the usual complimentary tea and coffee facilities there was even a complimentary decanter of brandy and a bowl of complimentary fruit.

Room for the night

With my lesson plan ready it was time for bed, I didn’t sleep to well but that was simply because I had to much going on in my head, the room was clean, quiet and comfortable and should have led to a perfect nights sleep. Breakfast in the morning was nice though with cereal, a fry up and toast, all washed down with plenty of coffee.

It was then back to the leisure centre for 8:30am and straight into delivering the coaching sessions we had planned. I was first up with my planned ‘body position’ and ‘ready position’ on a bike. It seemed to go well and after some feedback from Will it was everyone elses turn to deliver their sessions. That was the format for the morning so there was plenty of riding for us all as we became the participants in each coaching session. It was a good way to learn though as we not only gave our own session but got to see plenty of other people’s coaching styles so could pick up ideas and see what not to do from them.

The afternoon was then spent back in the classroom working on various aspects of coaching and coaching admin and then starting work on another session plan. Over the next 12 weeks we have to deliver at least 6 individual coaching sessions, complete with all of the risk assessments, session plans, feedback forms, evaluation forms and such like so we were making a start on our first one.

I’ve been organising a mountain bike night ride on a Monday evening for members of the triathlon club recently and there are a few people who come along who are lacking in confidence and skills on the rougher terrain so I’m hoping to use them as the subjects for my coaching sessions. Hopefully I’ll be able to provide them with 6 sessions on things such as body position, braking, cornering etc. so that I’ll have chance to hone my coaching skills and they will learn some valuable techniques that will make them better riders.

The challenge is to get them to ride the whole of the Pendam Trail at Nant yr Arian in confidence with minimal feet down. It’ll be quite a challenge for some of them and therefore quite a challenge for me, but hopefully we’ll get there and come Christmas we can all go out for a ride around a frosty pendam followed by a celebratory mince pie in the Visitor Centre. I’ve got lots of work to do before then though, planning sessions, delivering the sessions and turning them into better riders. Will and Mark will be in touch by email and on the phone throughout the process, checking up on me and offering help and advice where they can.

After that I then have a further day down in Ammanford where I’m assessed on yet another coaching session before I qualify as a coach.