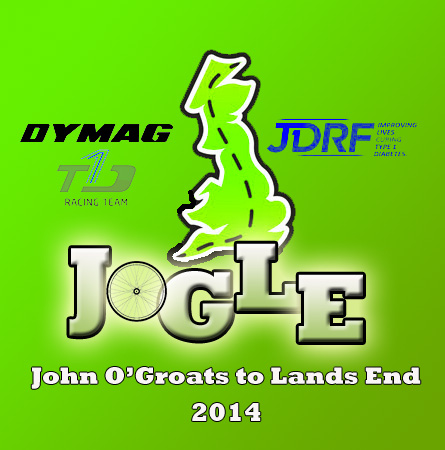 Those of you who have been being attentive will know that my next challenge is ‘JOGLE’, which is an acronym for John O’Groats to Lands Ends. Yes, starting at the end of the month I will be attempting to cycle from John O’Groats to Lands End in order to raise money for the Juvenile Diabetes Research Foundation. Anna and Morgan will be acting as support crew and we’ll be accompanied by several other riders, including some with Type I Diabetes.

Type 1 diabetes is an autoimmune condition that causes your immune system to mistakenly attack and destroy the cells in your pancreas that produce insulin. It can’t be prevented by adopting a healthy diet, exercising regularly, or living a healthy lifestyle and there is currently no known cure. But JDRF is committed to funding research that will find the cure.

The ride is a huge undertaking for all involved and all expenses will be coming out of our own pockets so we want to raise as much awareness and money for JDRF as possible. So please give generously and pass this along to friends and family. People can donate online here:

Now, I know what you are saying ‘Yeah Yeah, Alan’s riding from John O’Groats to Lands Ends, he’s always on his bike, that’s nothing for him’. Well, you are right, I do a fair bit of cycling and I do like to keep fit, but this is something completely new. As a Sprint Distance Triathlete all of my training is geared towards shorter events as the bike portion is only 12 miles. Most of my training rides are therefore around 15-25 miles long with the occasional ‘longer ride’ up to about 40 miles. If I do anything longer than that it’s quite an event and I usually start suffering and struggle a little with anything more than 40 miles. Also, as a triathlete I rarely cycle on consecutive days as I have to fit swimming and run training in too.

JOGLE is going to be a completely different beast and quite a challenge. We certainly aren’t easing into it, the first day from John O’Groats to Inverness is 120 miles, the second day is 87 miles and the third is 94 miles and on it goes for 10 days in a row until we get to Lands Ends. With distances like that and consecutive days in the saddle it will certainly be a challenge. I only hope my cycling shorts are comfy!

Here’s the full itinerary and routes we are planning to take:

As well as being a challenge for the riders, it’ll be quite an undertaking for the support crew as well. Anna is quite apprehensive about driving that distance, she’ll have Morgan to contend with, although hopefully he’ll be quite a help, and she’ll have to put up with the riders, several of whom will no doubt be aching, sore, moody and grumpy after a couple days in the saddle.

So, wish us luck and if there is anything you can do to support this fund-raising event then please do so.