A Day in the Garden

Following our walk along the beach in order to complete the Earth Cache at Ynyslas it was time for a day working in the garden.

Winter has certainly taken its toll on the garden, the crazy storms, record breaking winds and flood have all had an impact and the garden has only just started to recover from them. The moles haven’t helped either. The bottom of the garden is still quite soggy so we started out the front. I’d already made a start on the lavender border around the deck so finished this off and then we set to work weeding and tidying up the rest of the front garden. This went well and it was soon looking a little more respectable so we stopped for lunch and then inspected the bees – our first proper inspection of the beekeeping season.

All was well with the bees too, so it was now time for me to ‘play’ with my new toy. A new lawn-mower that we bought last week as my old one had pretty much fallen apart. It seemed to work well and I soon had the lawn mowed and things were looking up. There was of course still loads to do in the garden, but it’s surprising what mowing the lawn can do to help improve how it looks. 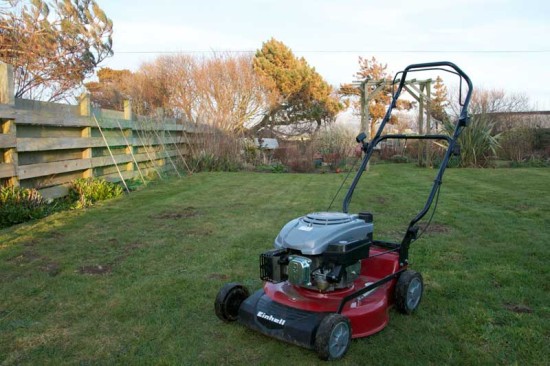 I didn’t stop there though and continued on with the general clear up. Edgeing and weeding the alium border next to the conservatory and making a start on the other borders too. There are signs of life everywhere and its good to see that most things seem to have survived. The daffodils are out in full bloom at the moment and some of the earlier ones are almost finished. The crocuses have almost finished too, but tulips are making good progress and the marsh marigolds are flowering. The aliums are beginning to grow quite well and even our rhubarb is making quite an effort. Elsewhere the poached egg plants are coming on well and spreading like mad, the welsh onions seem quite happy and most of the perennials are beginning to show signs of life.

Some Blue in the Garden

Working in the Garden

I cut back the dead wood on some of the perennials which helped tidy things up and also let me see where there was life. I even planted the beginnings of  small dog-wood hedge that I want to grow behind the beehives to give them a little more shelter and to separate the apiary off from the rest of the garden a little. Whilst there I cut back some of the larger trees around the apiary so as to let in a little more air, a little more sun and to make sure there were no overhanging branches. 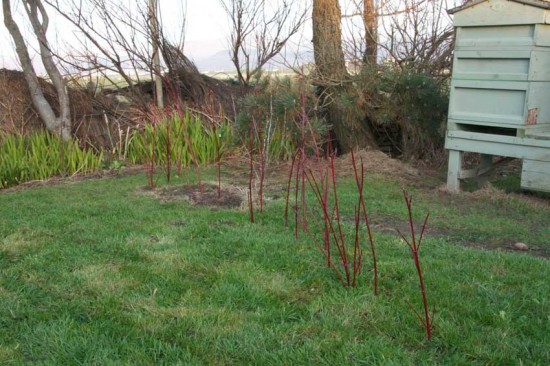 There’s still loads and loads to do out in the garden, but at least we’ve made a start and already the garden looks a little more loved and slightly less of a mess. It won’t be long before it’s all in full bloom so getting it under control now would be good so that we can hopefully spend some of the summer out there enjoying it. There are a few big projects we need to do though, including the purchase and construction of a new, bigger shed and a new driveway. A garage along the side of the house would be nice too but unfortunately all of these things will have to wait until funds allow for them.