It was my 43rd birthday on Wednesday and we had a busy day planned.

The week had already been quite disrupted due to the fact that Morgan had been home from school with some sort of lurgy. I had managed to fit in some work and some training though with a good turbo session and weights session on Monday and then circuits and a good swim session on Tuesday.

I woke up on Wednesday at around 2am and Morgan had given me his first birthday present of the day – his lurgy! I therefore decided to knock today’s training on the head, dose up on ibuprofen and take it as easy as I could. We were all off to Liverpool later in the day so the morning was a fairly hectic affair of tying up loose ends with work, booking my trip to Kitzbuhel and getting ready to go away.

First though there was the serious business of birthday presents to open. I’d Already had a rather nice lens from Anna which was also my Christmas present. My parents had got me a book called ‘Triathlon Science’ that was on my wish list and looks REALLY good, along with a lightweight Petzl head torch for running with. Anna’s mum bought me a Rick Stein curry cookbook and a subscription to ‘Spices of the World‘. For the next 3 months I’ll receive a package in the post a little like the Graze boxes I get, but they will contain several sachets of exotic spices along with sample recipes to cook with them. Expect some culinary curries any time soon. My sister had bought me a handy little multi-tool that I’ve put on my keyring and Anna and Morgan had got me some festive nail art decals for my Xmas toenails. Yep, that means you’ll be getting more photos of my toes sometime soon.

After sorting things out at home it was soon time for a fairly uneventful train journey to Liverpool Lime Street station where we met Anna’s mum Pat. She was there for her PhD graduation ceremony on Thursday and we were going with her to help her celebrate.

It was now gone 6pm so time for a nice dinner at Ask Italian. Being in a city there were plenty of places to choose from but we had been to Ask Italian whilst in London, had enjoyed it and once again had a vouchercloud deal on my iPhone for 25% off. We had a main course and pudding for the four of us for just over £35. I had a delicious chilli rich flatbread topped with salad, steak and cheese.

After dinner we wandered through the shopping area that was looking lovely with all of the Christmas lights and on to Albert Dock and our posh looking Jury’s Hotel. This was looking nice too with a light show outside thanks to the presence of a huge ‘London Eye’ style big wheel. 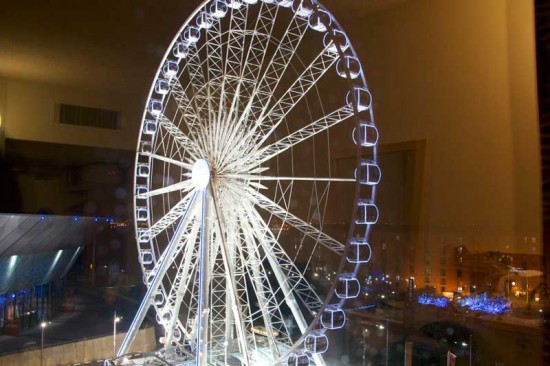 We settled into our room ready for a nights sleep and a planned big ‘lurgy-busting’ breakfast in the hotel at 7am.

Not a bad birthday despite the lurgy, but I was up again at 2am, did some work, wrote this blog post and still have hours to wait for breakfast, followed by what will be a long day of ceremonies, lunches, photos and a journey back to Wales.