Summer must be on its way – I went for my first proper open water swim of the year today.

Now, usually by this time of the year I’ve been in the sea loads either windsurfing or surfing, but as there hasn’t been much wind lately and the surf seems to have coincided with days when I had no time to get out,  I haven’t been in the sea nearly as much as usual. When you do something every day you just get used to it and don’t think anything of it, but after a few weeks of not being in the sea, the prospect of a cold water dip gets less and less enticing. Open water swimming is quite a bit colder than windsurfing or surfing too. Not only are you completely submerged in the water, but most of your head is under the water as well, and to top it off parts of my swimming wetsuit are only 1-2mm thick, not the 3-5mm of my winter surf suit.

The air temperature was still only around 7°C and Anna got ice cream headache in the wind just hanging the washing out, but I couldn’t put it off any longer though – I had the date in my diary:

I had to man up and get out there.

So, with the sun shining and the wind blowing I headed off to the estuary just before high tide this morning. Anna and Morgan came along too for a bit of fresh air and some moral support. There were a few enquiring looks from people on the beach when I jumped out of the car, swung my arms around a bit and then jumped into the water, but I didn’t hang around to explain anything.

The water was pretty cold on my exposed hands and face to start with but after a few strokes I soon became acclimitised and had a nice swim around the edge of the estuary. With the sun shining through the murky water it was actually quite nice out there. I didn’t stay out too long, just over 20 minutes and therefore swam just under a mile, but at least I’ve started my open water swimming for the year and will now have to try to get in once a week.

It was also my first time using my Forerunner 910XT in open water as well. My old Forerunner 305 wasn’t great when worn on my wirst in open water so I had to wear it under my swimming cap, but the 910XT has updated algorithms in it that smooth out the motion of your arms when swimming in Open Water. Well, it doesn’t actually smooth out the motion of your arms – that would be silly and very annoying! It does however  take into account the fact that your arms are moving when it plots the course that you’ve taken, so accounts for the movement! This means you can wear it on your wrist so that it still counts the number of strokes that you take, but the GPS trace and distance measurements that it gives you should be fairly accurate.

Here’s the GPS trace from my swim this morning – The smoothing is maybe a little exaggerated so the lines are probably straighter than I actually swam, but it is pretty close to what I did and accurate enough for my needs. Needless to say, it was high tide whilst I was swimming so the water was right up past the lines of cars – I wasn’t swimming in dry sand as in the satellite image! 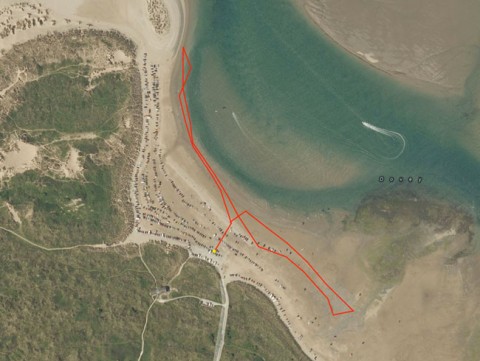 After a delicious homemade Butternut and Nutbutter soup (Butternut Squash & Peanut Butter) for lunch, we finished off a game of monopoly, I tinkered around fitting some cleats to my new cycling shoes and then once again headed out into the real world for a bike ride. Don’t worry, it wasn’t my first real bike ride of the year, I’ve already done a few of those. It was however nice to get out in the sunshine rather than on the turbo trainer, or out under cloudy skies.

My session today was once again hill reps, so I headed out to my usual hill and did 6 hard reps up it, each of which take around 4 minutes with an easy 3 minute roll back to the bottom. I then took a slightly longer route back home. Not a massive ride at just under 30 miles, but some good hard efforts on the hill climbs. Here’s the elevation data to prove that I did the hill 6 times.

I arrived home to find that Anna has discovered that Morgan had nits, so she headed off to the chemist to get some nit shampoo, we then had to treat Morgans head and bath him.

Now it’s time to chill and to polish off some of the Easter chocolates!