Strawberries from the garden

We’ve managed to beat the birds to some of the soft fruit from the garden at last!

Anna bought a single strawberry plant a couple of years ago and it has gradually been spreading around a small area of the garden. We have had strawberries on them before but had only managed to eat one of two because the birds always get to them first. I suppose it’s a cheaper and more natural way of feeding the birds than buying seed or fat balls, but it is a little frustrating as well. The strawberries do look delicious though so you can’t blame the birds.

We could of course protect them with netting but that doesn’t look very nice and the fact that the strawberry plants have naturalised and spread around a bit wouldn’t make this easy. Instead we just leave them and accept the fact that there will be loses to the birds. There are lots of strawberries out there this year though, including some big fat juicy ones so we have at least been able to harvest some and beat the birds to them. I think I should check on the blackcurrants and red currants today as well to see if I can beat the birds to those as well.

I had a few of the strawberries on top of a bagel with Creme Fraiche the other night and they were indeed lovely. I think I might make a smoothy with the others. 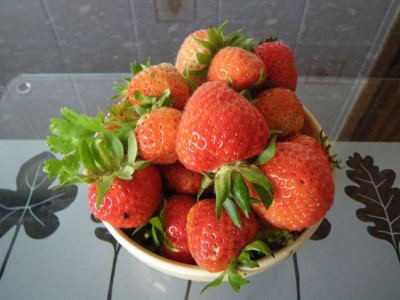 Fresh from the garden