I’ve always had a vision of planting lots of Cordylines (also known as Manx or Cabbage Palms) along the road here as I think it would enhance the seaside feel with a slightly tropical touch.  We’ve planted a few ourselves, other neighbiours already have some and we’ve even bought some as presents for other locals so that they could plant them in their gardens too.

All was going well and the palms were coming on well. The usual challenges for plants here are the very strong winds and the salt spray, both of which the palm trees cope with very well. In fact, they seem to thrive under those conditions. They don’t seem to cope so well with the cold though and the coldest December on record seems to have wreaked havoc with them.

Our largest palm was doing really well this year, it was about 8 foot tall and have flowered for the first time resulting in it branching into about 5 separate branches. I was looking forward to see it develop into a majestic looking tree this summer. It seemed to put up with the cold temperatures for a while but the prolonged cold snap was just too much for it and it is now a limp, sorry looking specimen that may not survive.

It might pull through I suppose as I have cut one back completely before and it has sprouted from the base so there is some hope but I think it’ll be a while before  it can be called ‘majestic’ again.

Ours isn’t the only one to suffer either. All of the palms along the road look to be in a similar or worse state than ours so my vision of a tropical looking boulevard at Ynyslas aren’t looking promising at the moment. 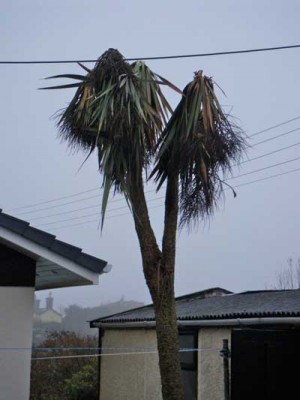