Wet and Windy Marching with the Band 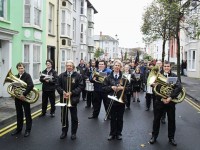 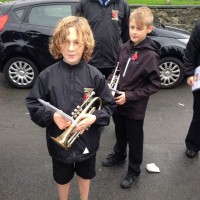 It was Remembrance Sunday last weekend and as usual we were all supposed to be in lots of places with different groups.  To try and fit everything in Alan got up early and went for his usual cycle and swim, although the weather was terrible and I think he got wetter on the ride than he did in the swim afterwards.

Morgan and I also had an earlier than usual start and first stop was in Aberystwyth for the annual Remembrance Parade with the band.  When we got up the rain wash lashing against the windows  so I loaded up the car with waterproofs and spare clothes, slightly concerned that Morgan’s first proper march with the band might just put him off forever.  Fortunately as we got into Aber the rain eased off and  we took the brave decision to leave the waterproofs in the car and stick with band jackets (with Morgan in shorts as ever!).

The band led the impressive and long parade from the town hall through town and along the seafront to the castle.  It was pretty windy and I think we all struggled to hold on to our music and instruments as we went round some of the corners into the wind. I’m just glad I only play the cornet and didn’t have to wrestle with a bass drum or tuba.  The rain stayed away and Morgan successfully finished his first March playing with the band.  It’s pretty hard going for him to read music he hasn’t played before while marching along not to mention the technicalities of changing music on the way.  We have given him the target of getting to the end with his music, cornet and mouthpiece still with him which he managed really well – he even managed to play some of the marches along the way.

After the March it was back to Borth to catch up with the scouts at their post Remembrance Service get together with yummy cawl for everyone and a table full of puddings followed games in the hall.

A cosy afternoon in from of the fire while the rain made a return completed our wet and windy Sunday.