Lego Build number two of Christmas was the huge Lego City Explorers Deep Sea Exploration Vessel. This consist of a large exploration vessel, several little submarine crafts and a sunken treasure ship. Christmas wouldn’t be Christmas without some Lego building now would it and as usual, Morgan and I sat down together to do it.

The exploration vessel has a pretty cool and very well detailed bridge and a winch for lowering a shark cage – handy really as the set comes with lots of sharks as well! 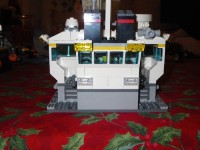 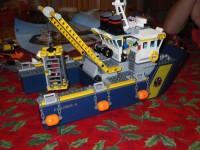 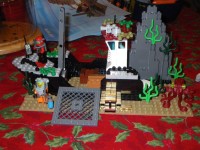 It took a while to build which is always nice, even though the large hull of the ship is one preformed piece. A number of sections of the sunken ship are too. As usual though, the attention to detail was good, the set worked really well and the Lego City Explorers Deep Sea Exploration Vessel looks amazing when completed.

Morgan also had a smaller Lego Explorers Submarine which he built himself later in the evening after watching a program on the TV about Lego at Christmas.