Day 2 we went to a school that our school was paired with. When we woke up we had to work our who was having a shower when, we decided last night that all the Year 6s have their showers in the evening and the Year 5s had their’s in the morning. I was second in the queue for the shower and I started getting all my stuff ready while my friend was in the shower. Once I was in the shower, after my friend had stopped singing and had realised he was holding people up, I realised I’d forgotten my Soap. I had to get into my towel and go back and get it. Because the light switch was outside the bathroom, it meant people could turn the light off when someone was in there, all I can say is that is one of the darkest showers I’ve had. So once I’d got out of the bathroom, without tripping over anything, I got dressed and waited for the other 4 Year 5s to finish their showers.

When we got to the school, called Scoil au Rida, we went into their hall and went into groups with two guides to show us around the school. First we went to see all the trophies that the school had won for Gaelic Football, Hurling and normal Football. Then we went into a class and they asked us questions. After being asked a few questions we went into a different class and got asked pretty much the same questions, so they were easy to answer. After being asked the same questions twice, we went outside to see the veggies they’re growing, and to see the horn that they have.

After having lunch with the school we went outside to learn some Irish sports. First was basketball, then hurling, then gaelic football and last of all normal football. Basketball was just normal basketball, I scored 2 baskets and we won. The hurling was fun, we had to throw up a ball, hit it and aim for the target painted on the wall, I got 23 points all together. Then was Gaelic Football, which was fun but we didn’t have much time. We had to run to a cone, but every 4 steps, we had to bounce the ball, because that’s what they have to do in Gaelic Football. Next was normal football, I was in goal for some of it, but sometimes up front, we won with the scores being 4-2 to us. I scored 1 goal. Then we went inside and the school put on a show for us with Irish Dancing and singing.

After visiting the school we went to TGI Friday’s where we were having tea, but we had a game of 10 pin bowling first. It was really fun and I won out of my group, with 106 points. I got 2 strikes in total, one after each other.

We went to sleep earlier that night after all the sports we’d done that day.

Mummy and Daddy were able to see what I was up to as well thanks to the fact that the teachers were posting an update to Twitter each day. Here are the photos they posted to Twitter from today. 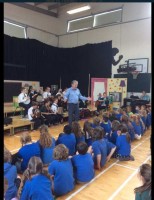