Surf Ski vs K1 Kayak – A Decision Made

If you’ve read my recent post about kayaking at Llyn Geirionydd in Snowdonia you’ll know about my dilemma as far as  surf ski vs K1 kayak is concerned.

I couldn’t quite decide if I should get a K1 kayak for out and out speed or a surf ski for more versatility. The K1 kayak had the potential to be faster, but only if I had the skill to make the most of it. The surf ski would be easier to use, more versatile and safer on the coast, but not as fast in a quadrathlon race. None of this was helped by the price of such things and the fact that I already have a surf ski so how would another one fit into my ‘quiver’ of paddling craft.

I made a decision over the weekend though. No, it wasn’t to get both! Well, not quite anyway. In fact, I’ve decided to get a surf ski and there are a number of reasons behind this decision.

All in all I’m hoping it will be a good next step for me. Of course it doesn’t rule out getting a faster, less stable K1 kayak at some point in the future should I feel the need. Hopefully by the time I can afford one of those as well my paddling will have improved and I’ll be able to look at the faster end of the K1’s rather than the more stable end.

Even if I do end up progressing to a K1 in the future the surf ski will still be a very useful addition to my flotilla as it’s versatility and added safety will probably mean that I’ll continue to use it as much if not more than the K1 in training, especially in the winter months.

So, what surf ski did I choose? Well the heading kind of gives it away but I’ve decided to go for the Knysna Genius BLU. Surf ski’s aren’t easy to come by in the UK. You can get a few models from the likes of manufacturers such as Epic, Nelo, Nordic Kayaks and Think but they don’t come cheap. I haven’t been able to find out the price of some of them but most seem to start at just under £2000 for the basic construction and then the sky’s the limit as you start looking at the more exotic and lighter constructions.

I was however put in touch with someone who imports Knysna surf skis from South Africa and runs the company Race Pace Ltd. that sells them. These ski’s currently start at £975 for the basic fibreglass construction and rise to £1690 for the lightest, top of the range carbon epoxy vacuum construction. I made some enquiries and checked stock of these boats. I had a quick go in a couple as well. Upon checking the weights, it seemed clear to me where the best value lay.

It’s quite a big £590 price jump from the glass epoxy to carbon epoxy model and only a saving of 0.4kg. Obviously there would be improvements in stiffness and probably durability too but the middle of the range construction seemed good to me.

There was only one in stock though so I didn’t have any choice in colour – The Knysna ski’s don’t have the most exciting colour schemes and graphics anyway. I haven’t bought it quite yet or even seen it but I think it’s mainly white with some red/orange trim on it. Possibly something like this. 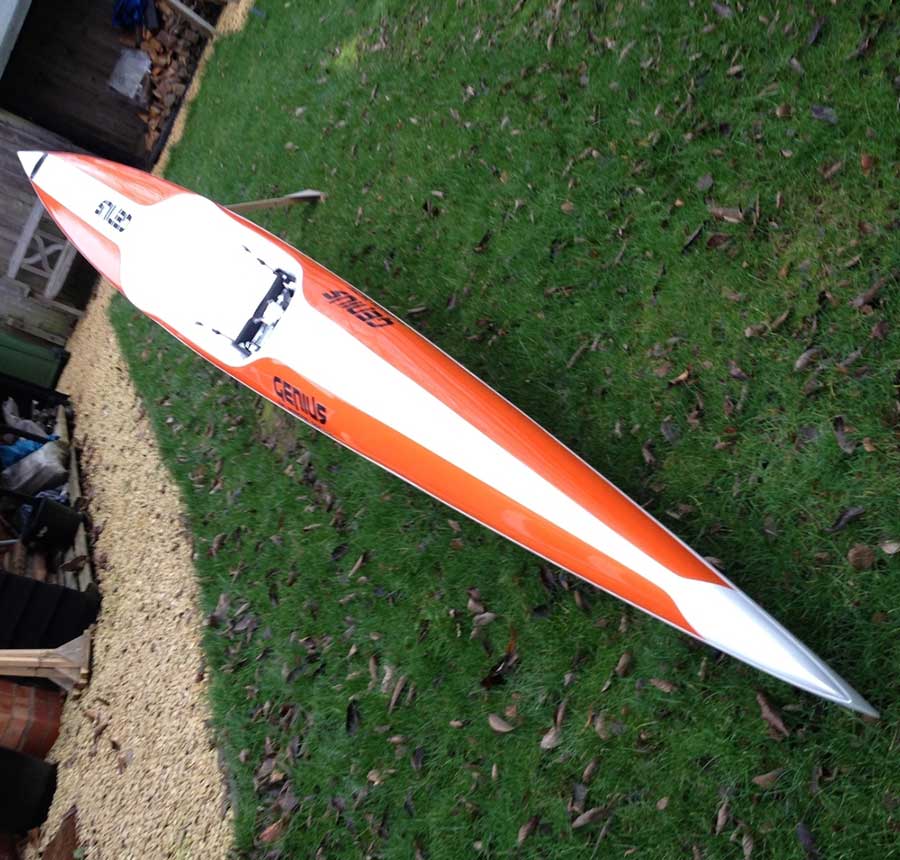 I guess the colour doesn’t matter too much! It comes with an adjustable foot rest system, handle, pull strap and 2L water bottle holder. I’m hopefully going to collect it later this week and can’t wait to give it a proper go – assuming of course that my chest is feeling a little better by then.