Paddling and Camping in North Wales

Third weekend of the month, it must be time for the Dyffryn Conwy Paddlers kayak time trial in Llyn Padarn. The North Wales Surf Ski Paddlers were also thinking of organising some low-key, informal surf ski races over the winter so I suggested they do them on the same weekend. That way, those of us that have to travel to get to these races could do them both. With that settled I was looking forward to a weekend away in the camper taking part in the Surf Ski races in Colwyn Bay and the Kayak Time Trial in Llyn Padarn.

Anna was likewise looking forward to a quiet weekend at home. I couldn’t convince Morgan to come with me either, although he did have the excuse that he was going to the Panto on Saturday. Anna and I had already been to the Panto a couple of weeks ago – very good it was too, as always.

I set off early on Saturday morning for a drive through North Wales. There was a fair bit of snow on the hills and it was snowing heavily as I drove over the pass from Blaneau Ffestiniog to Betws y Coed. By the time I reached the coast at Colwyn Bay I was greeted with grey skies, some drizzle, temperatures around 4ºC and a light breeze, The sea looked calm with just a tiny little swell.

Martin was already there and getting ready for a paddle. These races were his idea and he had decided to be chief time-keeper for the day and was therefore going out for a quick paddle before the races began. I think he should have joined us for the races really as we could all have timed ourselves. They were after all all only informal races with nothing at stake. He was keen to do it properly though so set off for a little paddle while I made myself a cuppa in the camper. 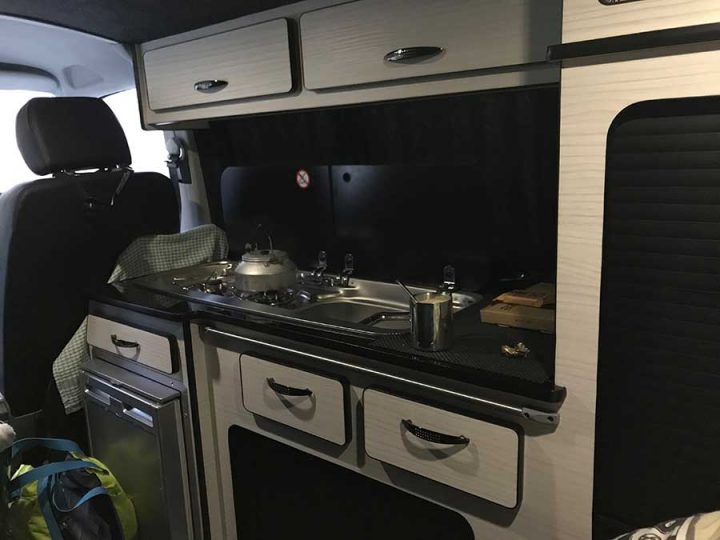 Cuppa in the Camper

As the others turned up we had a little chat and got ourselves ready for what was planned to be two races. The idea was that the first race would be a mass start. We would paddle from the beach out to the Rhosneigr Buoy around the buoy and then back to the beach. This would be a distance of about 5km. The times we posted from this race would then be used as handicaps for a second race. This second race would be a pursuit race following the same course.

After a bit of pfaffing on the water we were off. There were only 5 of us racing. Surf Skiing is still quite a small sport in the UK so it’s not easy to get lots of us together so having other people to surf ski with is always good. As well as myself and Martin on the beach there was Steve, Mike, John and Mark.

We all set off together and soon three of us had a little lead. Steve was leading the way with Mike right in his wake. I was just a little off to the side surprised to be keeping up with them. As regular readers will know, I’m new to paddling having only started this time last year. I did the Colwyn Bay Blast race last year and came dead last. I bought a new surf ski soon after that which I found quite difficult at first as it’s quite unstable. I now feel more confident in it but I’m still no faster than I was on my old heavy ski. My usual objectives for such a race are therefore first and foremost just to finish, and second to try to keep the others in sight. I was therefore pleasantly surprised that I was keeping up and without too much effort either. Don’t get me wrong, I was still trying hard but at an intensity that I knew I could keep up for the full 5km.

The green Rhosneigr Buoy marking our turnaround point didn’t seem to be getting any closer though. It was certainly a lot further away than it had looked from shore. The sea was relatively calm, but there was a little more swell and chop out here away from the shore. The incoming tide over the shallow water off Rhos-on-Sea made things a little choppier too. Nothing too bad though and I was feeling good.

As we finally approached the buoy Steve and I had opened out a little gap on the others. Steve asked which way around the buoy we should go. I didn’t know and said I’m sure it didn’t really matter. I followed him around in an anti-clockwise direction and we started heading back to the beach. It’s now that we noticed that there was actually a bit of wind as we headed into it. Every now and then a little set of shallow swells would roll through so we put in an extra bit of effort to catch them but I’m not really sure how much use it was. The swells were short-lived, shallow and fairly slow-moving so I’m not sure that they were much benefit.

I eased off a little on the way back to the beach and we finished with Steve just ahead of me. Here are the results from this first race.

Next we did it all over again. This time with handicapped start times based on the first race. I therefore had three people to chase and had Steve chasing me. I caught and overtook John and Mike on the way out to the buoy and then caught Mark as we came back to the beach. At the same time, Steve caught me so we had quite a close finish. I hadn’t seen him sneaking up on my right hand side!

Once we were all back I had a quick go in Steve’s Epic V10 Ski which felt about the same stability as mine. We then headed off to the cafÃ© for a brew and some banter.

Martin had brought prizes along too so I was given a big bottle of Belgian Beer for my troubles. That was a nice surprise, as was coming second in the races. Maybe I won’t be dead last at this years Colwyn Bay Blast – we’ll see! 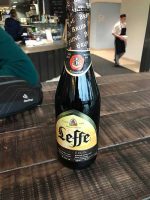 As we headed off in our separate ways, I drove off to Llanberis.

The Kayak Time Trial on Sunday takes place in Llyn Padarn, Llanberis. My plan was to camp overnight there and race the next day. With some time to kill in the afternoon I had planned a run. My knee had been feeling a little odd the day before though so I kept things easy as I headed off into the grey misty conditions. I ran around the southern edge of the lake and then across the bridge towards the Electric Mountain at Dinorwic. I checked the car park signs as I passed to see if there was anywhere suitable to park up for the night. I then followed a steep, muddy, slippery path with lots of slippery slate steps up the hill towards the snow-line. The mountains of North Wales looked impressive with their covering of snow even if they were mainly shrouded in cloud. The views down to the lakes were nice too. I was in no particular hurry so stopped to take some photos. 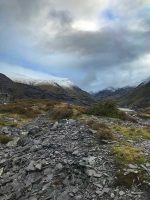 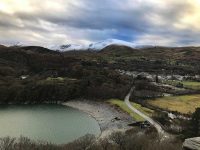 I continued up, into the hills and through the trails of Padarn Country Park, eventually emerging out onto the road to Deiniolen. Whilst there I spotted what looked like a nice spot to park up for the night. I then headed back down through the Country Park and down to the lakes edge where I retraced my steps across the bridge and back to the camper.

Back at the van I washed and got changed and then the sun came out. It lit up the hills and suddenly Llyn Padarn was looking lovely.

After a couple of cups of coffee in the camper I headed into Llanberis, bought some supplies in the Spar and then popped into Petes Eats for dinner. Petes Eats is renowned for its large portions and good value meals and they didn’t disappoint. I’ve never seen quite so much liver on a single plate. It was piled high and topped with a massive rasher of bacon all served with lovely onions, thick tasty gravy, chips and peas. I don’t think many people would have finished the lot but I had no trouble doing so!

I then wandered back to the van and drove up to my parking space in the hills above Deiniolen. It was lovely and quiet up here with clear skies and temperatures just above zero. It did cloud over later though and rain rattled the roof overnight. It was perfectly cosy in the camper even if I didn’t have my sleeping bag with me. The duvet was fine and I did have a new cushion too! 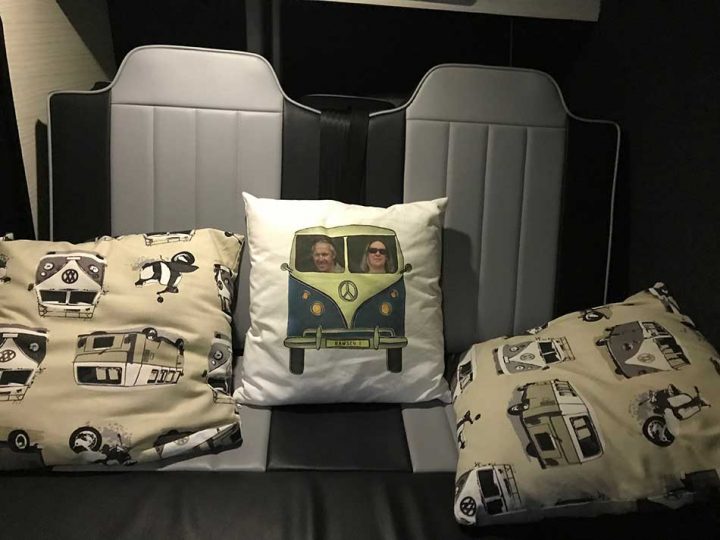 The following morning I breakfasted in the camper then headed down to the shores of Llyn Padarn where I met everyone for the Kayak Time Trials. It was a blustery day with white-caps troubling the waters. There was a good turnout though with 15 of us on the water in a variety of craft. K1 kayaks, sea kayaks and me in my surf ski. After a choppy paddle into the wind to the starting area we were soon set off. It’s a handicapped race with the first person setting off 8 minutes ahead of me, several others set off before me and then I was off, alongside someone called Kevin. Starting after us were a further 4 people. Kevin followed in my wake for a while with me just ahead of him. He then suddenly disappeared and gradually lost quite a bit of time. Meanwhile I was catching those in front of me and started overtaking some of them on the fun run down to the turning point. With the wind and waves behind us it was a quick sprint down the lake. We then turned into the wind for a long slog back through the chop.

Everyone made it though and despite the fact that most people were about 3 minutes off their PB’s we all had a good time. The heavens opened as we got back to the car park, so the hot chocolates and coffees in the shop were very welcome indeed. With the chatting done and the race times recorded it was time to head off home for a long and very wet drive through the floods of North Wales. Roads were being closed everywhere. Anna had been to a 1yr olds birthday party south of Aberystwyth and was struggling to get back through the road closures as well. We did both make it and arrived home at similar times. The phones were ringing by now with flood warnings coming in thick and fast. It was still pouring with rain so I left the surf ski on the roof, unpacked my kit, started doing the laundry and played with our new coffee machine.

A good weekend away in North Wales with plenty of activity.