Rhos on Sea to Rhyl

It’s been a while since I’ve made any progress with my project to run around the Wales Coast Path. In fact it’s been over two months. This was mainly thanks to a sore knee, but Christmas and other things have got in the way somewhat too. Thanks to my knee I was unable to run too far and had been gradually building back up. It seemed a little silly to drive for two hours to get to North Wales if I could only run about 5 miles before having to stop with a sore knee. It’s a long way to go for a short run even if it does tick off some miles on the Coast Path.

However, I was in North Wales on Saturday for a Kayak Time Trial event in Llanberis. This wasn’t too far from Rhos on Sea where I’d finished my last coast path run. I therefore decided to head there after the kayak race. I hoped that I’d be able to extend my run out to 12 miles and make it to Rhyl, but there were plenty of shorter options. The main road and the bus route here essentially follows the coast, so if my knee was hurting after 5 miles I could always stop and jump on the bus back. At least I was in the area anyway so wouldn’t have made the long journey just for a short run.

I had a busy morning before my Coast Path Run though. I loaded up the car with my running kit and kayaking kit and headed to Llanberis for my first ever Kayak Time Trial. That was followed by coffee, cake and a chat with the other kayakers before I got in the car and headed off to Rhos on Sea. I found somewhere to park in a residential street just a short way back from the coast. I got changed and started on my way.

I had a brand new rucksack today, a Christmas present that I had yet to use. It was loaded with my usual Coast Path kit. A map, a drink, some energy gels, energy bars and a flapjack, my phone / camera, a jacket, hat, gloves and a buff. I locked my car and added my car key to the cargo and set off running through the streets of Rhos on Sea down to the coast. I had new shoes on too. Until now I’d been wearing Inov8 Talons on my Coast Path runs, these are full on trail shoes that had proved to be good. The were lightweight, fast drying, had good grip in the mud and were comfortable. I’d got through a couple of pairs of them though and had found that my feet were sore after longer stretches on tarmac. They were perfect for ‘proper’ off-road coast path running, but here in North Wales things had become a little more urban. Concrete and tarmac had replaced the mud and sand. I’d therefore treated myself to a new pair of Inov8 X-Claws. These are very similar with the same tread pattern, but a little more cushioning. Mind you, looking at todays route I think maybe proper road shoes with lots of cushioning would have been better as it was going to be 100% concrete or tarmac all the way.

I was soon on the seafront and running past the point I had finished at last time. I made my way along the prom where there were plenty of people out walking, riding bikes and scooting on scooters or skateboards. I weaved my way in and out of them and made my way towards Colwyn Bay. 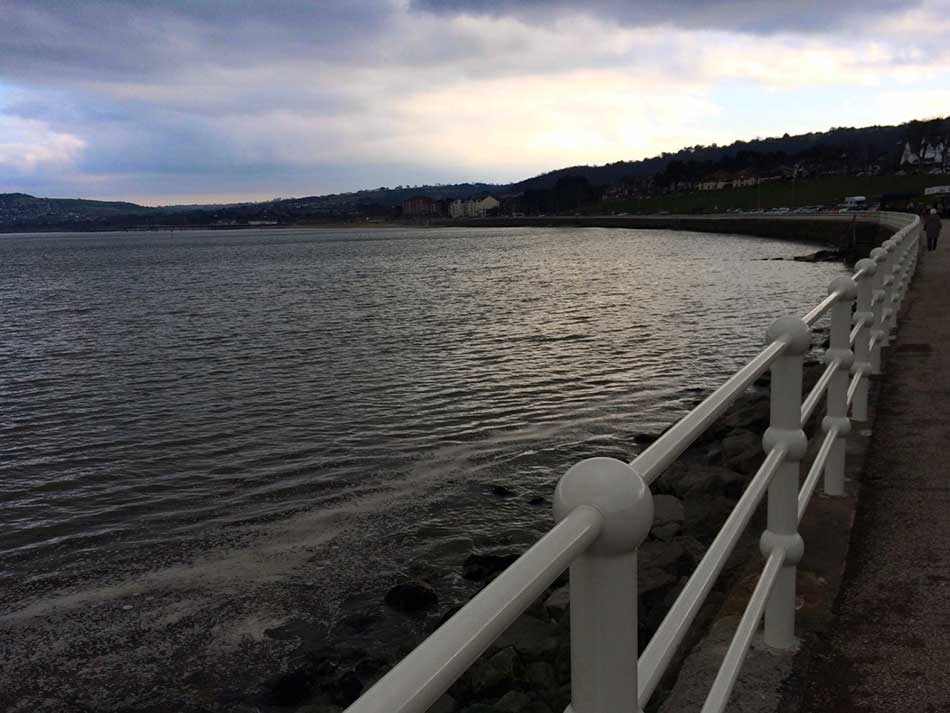 Partway along the prom, the road and footpath were closed. The pier at Colwyn Bay has recently collapsed into the sea and is therefore unsafe and the entire prom is being redeveloped. The prom here will be closed for up to a year and there is no access so I made my way into Old Colwyn and ran along the streets there following the diversion. I soon made my way back down onto the coast the other side of the pier and continued on along the long sweeping prom.

I haven’t spent much time on the North Wales Coast really and it is very different to the rocky headlands and steep paths elsewhere. Here the coast is comprised of long sweeping bays with huge, wide promenades backed by terraces of hotels and restaurants.

Eventually I left the hustle and bustle of Colwyn Bay Prom behind me and headed off onto a tarmac footpath and cyclepath that is sandwiched between the sea and the busy North Wales Expressway. 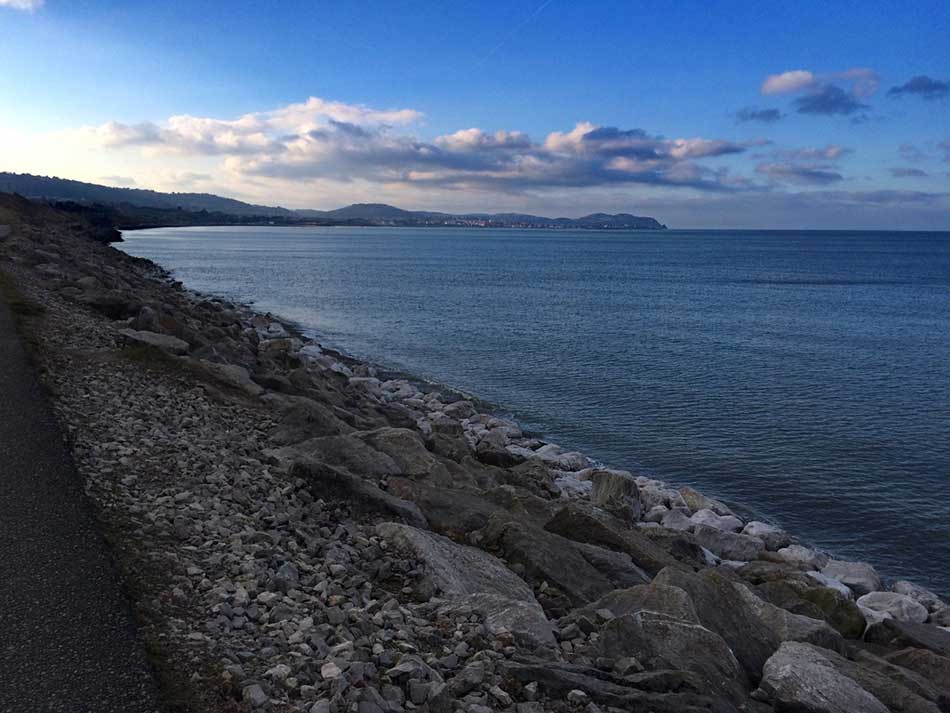 Looking back to Colwyn

It was a little quieter along here with fewer people about, just the odd dog-walker and cyclist. The scenery wasn’t up to much though. The sea was to my left, edged by huge piles of rocks and riprap. In places this became fully engineered sea defences in the form of mile upon mile of huge interlocking concrete anchor like structures These are known as ‘Dolos’ with each one weighing 5 tonnes. There are thousands of them along here and they were put in place to protect the A55 from coastal erosion. Each Dolo is numbered individually. Apparently there are some 20,000 of them but I saw numbers up to 22,000!

I continued on my way, up over a few little rises but for the most part the Coast Path here was long, flat and uneventful. There are glimpses of some large rock faces from the quarrying that has taken place here. Raynes Quarry just inland at Llandulas is a huge limestone quarry. Conveyer belts carry the crushed limestone from the quarry, under the North Wales Expressway and the footpath I was on and out to a large unmissable jetty. 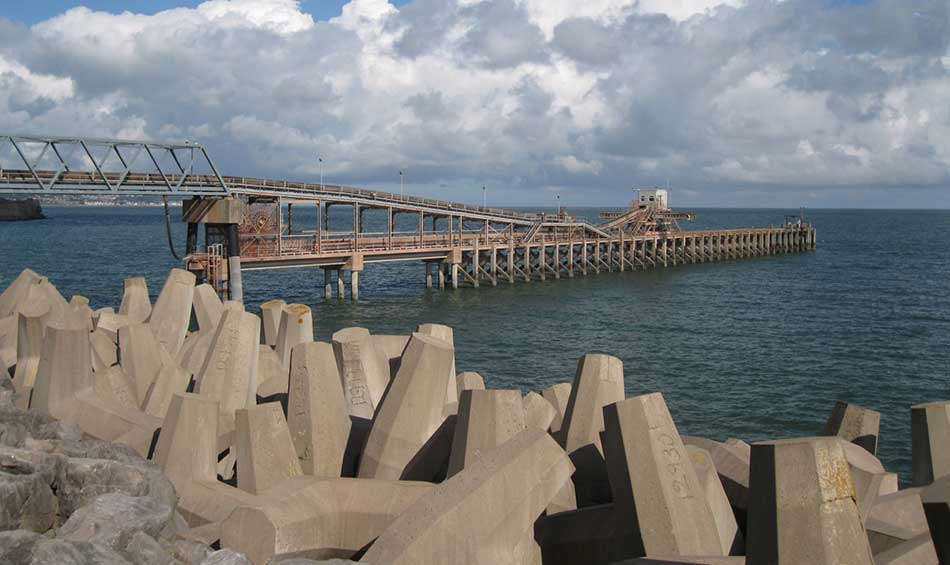 I spotted some people climbing on some cliffs along here too, but otherwise it was a long fairly uneventful path to follow. 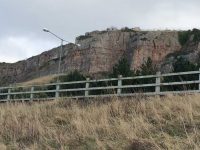 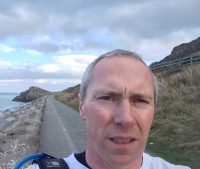 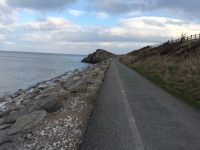 Further offshore the bay is dominated by massive offshore wind farms. Gwynt y MÃ´r is Wales’ largest wind farm. It is about 10 miles offshore in Colwyn bay and has close to (maybe more) than 200 huge turbines. It is able to generate enough energy from renewable sources to power the equivalent of approximately 400,000 homes – around a third of the total number of homes in Wales. 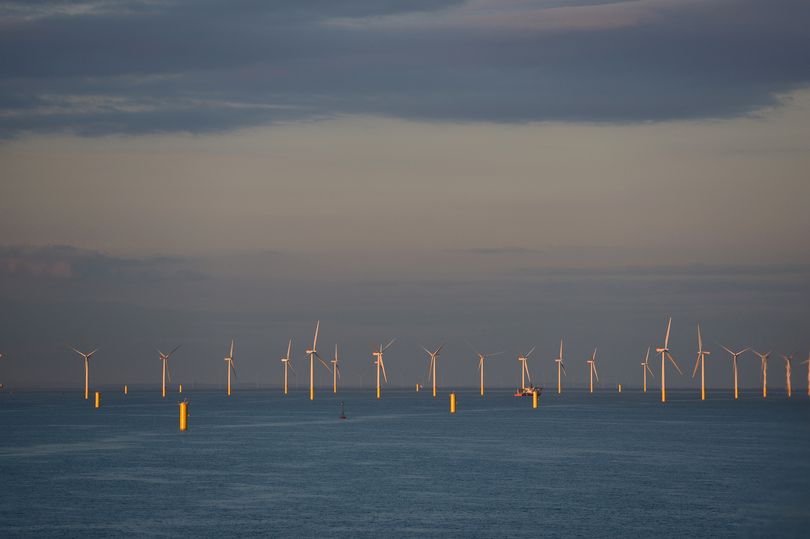 I plodded on making my way past Llandulas, over a little bridge and through a small parkland and then out onto a fairly boring stretch alongside caravan parks and the railway station at Abergele and Pensarn. There were fairgrounds, numerous donut shops that tempted me to stop and more and more people on the path. For the most part though it was straight, flat and concrete with little to look at. I was making good time though and although my knee was aching it wasn’t hurting so I kept going. 7 miles were soon behind me and it looked as though I’d make it to Rhyl.

The miles continued to be ticked off at around 8:30 pace as I passed endless rows of caravans on the approach to Kinmel Bay. I continued ever onwards with the buildings of Rhyl getting closer. Eventually I weaved my way along the Coast Path around the spit at the mouth of the River Clwyd and across a nice looking bridge into the town of Rhyl. 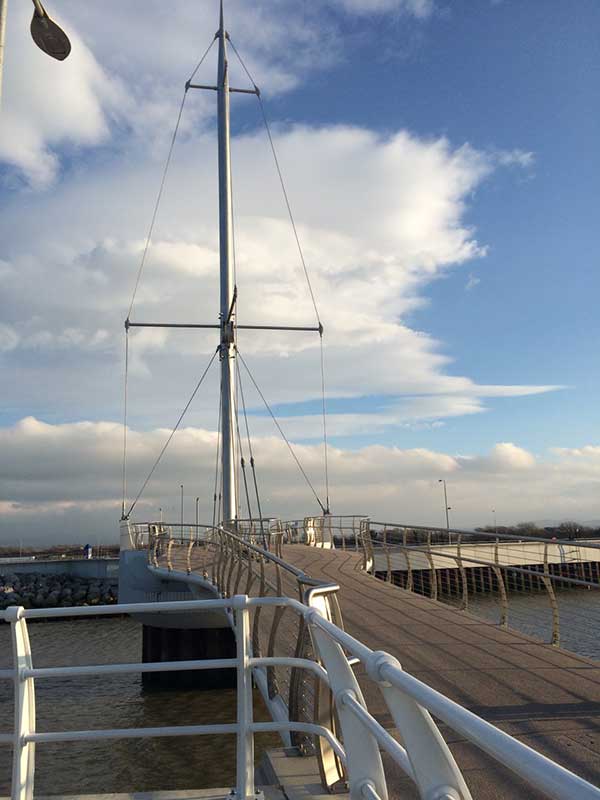 I picked up the pace a little here as I ran through the streets of Rhyl. It was a busy Saturday afternoon with thousands of people out walking along the Parade. I ran all the way through Rhyl to the roundabout and then spotted a small sign for the bus station so ran through the shopping centre weaving my way through the shoppers and children on scooters. I soon found the bus station and the number 12 bus to Llandudno was there waiting for me. I jumped on it ready for the 45 minute journey back to Rhos on Sea and the two hour drive home.

Not the most exciting of stretches of Coast Path, but that’s another 12 miles or so ticked off and there’s not too far to go along the North Wales Coast now.