Another weekend and another run along the Wales Coast Path, this time from Aberdovey to Llwyngwril in the rain. I started the day as usual with some work on my computer whilst Anna and Morgan slept. Once they were awake I was able to jump on my turbo trainer in the Beach Room for  a 90 minute ‘warm up’ session.

It has been a recovery week this week though so despite still spending 1½ hours on this session it was relatively easy. The whole week has been fairly easy training wise and I should be feeling refreshed and ready to go, but that isn’t usually the case with recovery weeks. Today was no exception and I was feeling a little lethargic and lazy.

I did a TrainerRoad session called Brasstown which is described as 90 minutes of aerobic Endurance riding spent between 65-75% FTP with optional form drills including Form Sprints, Endurance Spinning, Quadrant Drills & Single-Leg Focus drills. It’s not the most exciting of sessions but was a good way to start the day and I felt OK come the end of it. I wasn’t sure if I was up for a long coast path run from Aberdovey to Llwyngwril next, but there was only one way to find out. 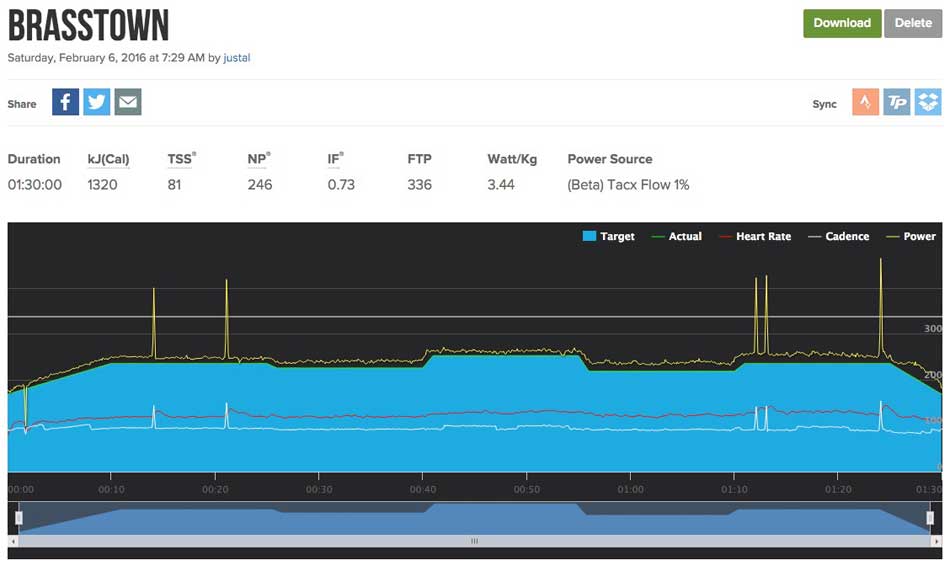 After a quick shower, a quick breakfast and a change into my running gear, I jumped into the car for the 50 minute drive to Aberdovey. This is where I finished my Wales Coast Path run last weekend, so it was the starting point for today’s adventure. I parked alongside the road so didn’t have to pay, jumped out of the car into the wind and rain and started my run.

From Aberdovey, the Wales Coast Path becomes very coastal indeed. Gone are the hills and valleys that the detour into Machynlleth to cross the River Dyfi had brought with it. Instead these were replaced by the wide open sands of the beach. As far as running is concerned, this introduces it’s own challenges. Soft sand saps your energy and slows your pace and miles of endless sand don’t do much for motivation either. It would seem as though the flat sands and therefore lack of gradients would be a good thing but it just means no rest on the descents and miles and miles of relentless pounding using the same muscle groups all the way.

My calves were tightening up by the time I reached Tywyn where the energy sapping sands were replaced with the unforgiving concrete of the sea wall and the tarmac of the Tonfannau road. It was still pancake flat though until about the 6 mile point. It felt as though I had been running on the road for ages by now but eventually the road started pointing upwards a little, and gradually steepened too. The Coast Path signs then directed me off the roads and across several very muddy fields.

From here I emerged to cross the main road at Rhoslefain, having taken what I think was a bit of a detour up an unnecessary hill! I was soon back on track though and squelching my way up an extremely wet and muddy track. My shoes, lower legs and knees were caked in slimy mud and my face was splashed with it too as I continued to climb up the hill and out onto another tarmac road. This turned into a track a little further up the road and then wiggled it’s way through several fields, all surrounded by the amazing dry stone walls that this part of the coast is well known for.

It was still raining heavily and the sodden ground was still one big mudfest for me. Almost every step was associated with a slip of some sort and mud was splashing everywhere. The climbs were slippery, the descents were treacherous and the flats were just very soggy. It was a little chilly in the wind on top of the hills too but I could see Llywngwril down below me, and had some lovely views through the rain and gloom out to Fairbourne with Barmouth in the distance. 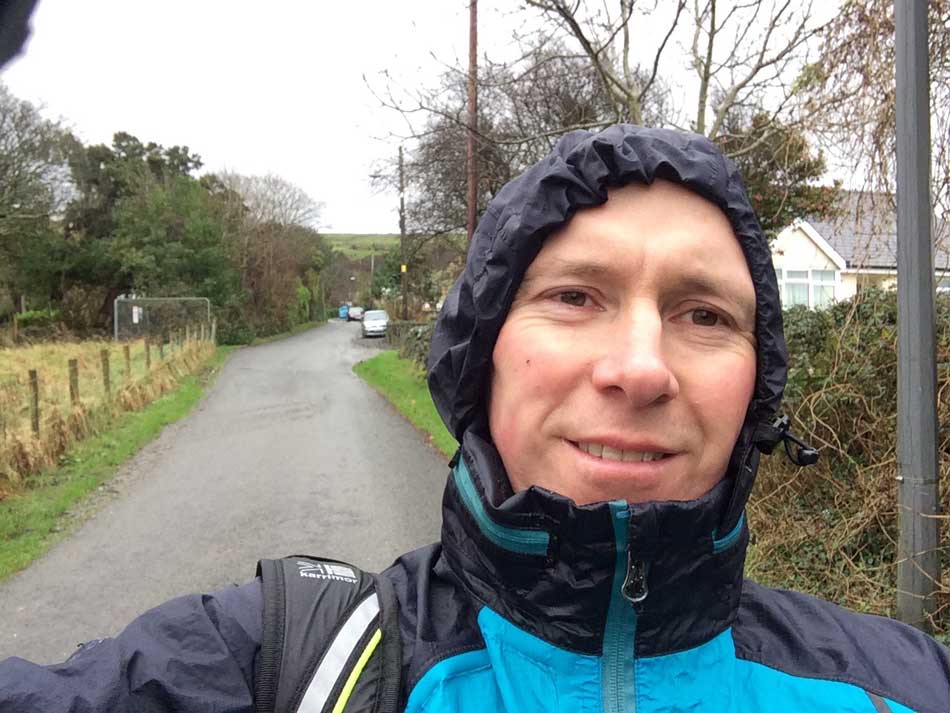 How Far shall I go?

I was now just over 10  miles into my run and had some decisions to make. At this rate I should get into Llwyngwril at about 12:45, 25 minutes before the train back to Aberdyfi leaves. My other option would be to continue on to Fairbourne. That would have been nice but would add another 5  miles to my run and wouldn’t have worked out too well with the trains. There was no way I’d get there in time for the 1pm train and the subsequent one would be at 3pm. I calculated that I’d probably arrive in Fairbourne at around 13:45 which would then mean I’d have over an hour to wait for the train. I briefly considered continuing on all the way to Barmouth, but as I didn’t know for sure how much further that was or the train times from Barmouth I soon decided that it was probably best to stop at Llywngwril where I wouldn’t have to wait too long for the train.

A couple of extra miles

In the end, after running for a mile or so out of the village I gave Anna a quick ring to let her know where I was and to see if she could tell me which side of the village the railway station was. Apparently it was right in the middle of the village where I had expected it to be so I turned around and ran the mile or so back into the village. 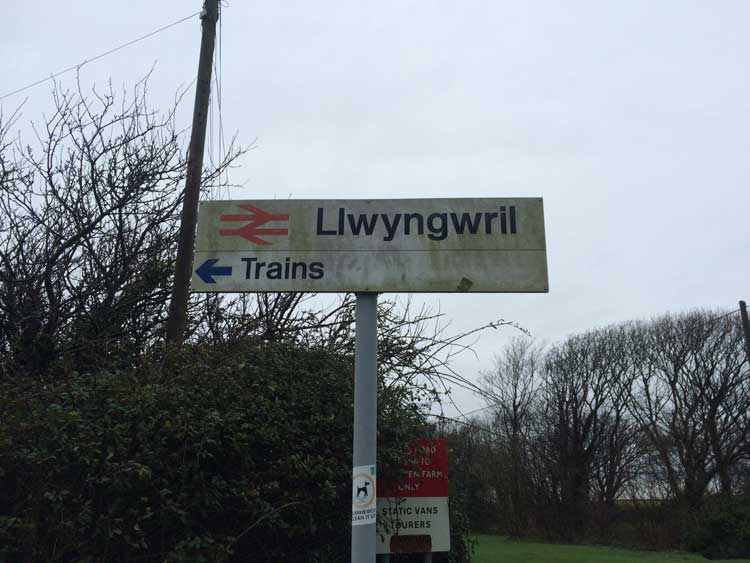 This time I found the train station without any problems at all, right where it should have been and not far from where I had come off the hills and into the village in the first place. Oh well, the extra couple of miles had used up some o the 25 minutes I would have had to wait for the train and had kept me warm at the same time.

According to the display on the small station at Llwyngwril, the train was on time and would be here in 10 minutes time. I quickly put on an extra layer as I was getting cold and starting to shiver and then walked up and down the platform so that my legs didn’t seize up. There was a notice saying

“The train stops by request only, please signal clearly to the driver”

Somehow, I could just imagine me standing here on this wet, windswept platform, shivering and waving frantically at the driver whilst the train simply sailed on by. Thankfully that wasn’t the case and the train did indeed arrive on time and did stop for me.

I climbed onto what turned out to be a completely packed train. There was standing room only and already lots of people standing, so I squeezed on and probably looked like a slightly odd individual wearing tights and covered in mud shivering in the corner. The train journey was only a short one though taking about 15 minutes to get me back to Aberdovey and I didn’t get too many funny looks – maybe they are just used to weird people around here! I then had about a mile to walk back to the car shivering properly now which meant that the car and the promise of its heater was a welcome sight. From there it was just the 50 minute drive around the River Dovey to get home for a nice warming bath.

Today’s run was around 12 miles, but I ended up doing 14.21 miles thanks to the extra I did in Llwyngwril. The pace along the flat sands and flats through Tywyn was fairly good but it soon tailed off once I hit the muddy hills. The distance felt OK though and despite the wind and rain it was still a nice bit of the Wales Coast Path with some variety. The windswept open expanses of the sandy beaches, the tarmac roads around Tonfannau, the muddy countryside tracks and then the windswept hillsides above Llwyngwril. I know what the views from here can be like, but unfortunately today it was very grey and wet.

That’s Aberdovey to Llywngwril completed, 5 stages down and plenty more to go. I just have to decide how far to go next week.