The Aberdovey Triathlon was never in my race schedule for this year, but last weekend at swim training I was asked by the organiser if I’d be kind enough to help someone out and do the swim section of the race for them. They wanted to race but didn’t feel comfortable enough in open water so needed a swimmer to make up a relay team.

I decided that it wouldn’t do any harm as I could do it instead of my usual Sunday morning swim session. It was only a 1500m open water swim so even if I went fairly hard it wouldn’t take any more out of me than my usual 3500m swim session and it would be a nice day out in Aberdovey. So, that was the plan for Sunday. Anna and Morgan were coming along too so we loaded the car up with beach gear, swimming kit and crabbing equipment and headed off at 9am in the morning so as to get to registration in Machynlleth which took place between 9 and 10.

The race itself doesn’t start until 12:30 but as T2 takes place at the leisure centre in Machynlleth and the swim and T1 take place 13 miles away in Aberdovey, they need to leave plenty of time between registration and the start of the race to allow people to set up two transition areas, and transfer kit and themselves between the two locations. Also, the estuary at Aberdovey has a very strong tidal flow so the swim has to take place at slack water (not that the water is ever completely still).

As I was only doing the swim I didn’t have to deal with the logistics of setting up transitions and getting kit from place to place, so I met up with Tom who I was doing the swim for at registration, signed the various forms and had a chat with a few people. I hadn’t met Tom before but he seemed quite pleased that I had agreed to swim for him and was looking forward to the bike and run.

We then headed off to Aberdovey, wandered around a little and checked out where we thought the swim went and where I would have to run from the swim exit to T1 where I would hand over to Tom. It all looked pretty straight forward. The weather was lovely once again, a little hazy sunshine, just a slight breeze and temperatures in the low 20’s. Morgan played in the playground for a while and then we went crabbing while wasting time before the race start. 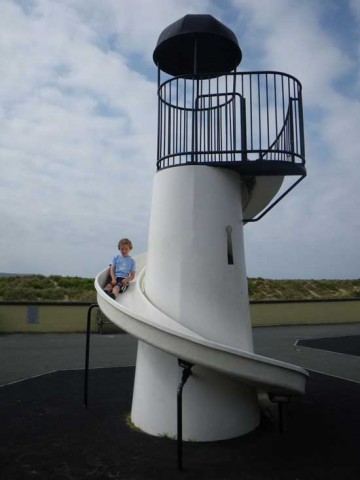 There were lots of people doing the race that I knew, not just locals from two clubs in the area but a few from further afield in Wales that I knew too so it was good to catch up with everyone and see how they were. My plan was to have a pleasant swim and a nice day out so I wasn’t really racing but I still expected to be up near the front end in the swim. Helen Marshall was competing though and I knew she’d beat me by miles in the swim, I wasn’t sure about Arthur Connell as our swim times are usually quite comparable but I knew it wouldn’t be easy even if I wasn’t ‘racing’.

The time soon came around to don our wetsuits, test the waters (which were perfect) and gather on the beach for a quick briefing and the start. For some reason I always have the same stance just before a race – arms folded, thumbs up and deep concentration! 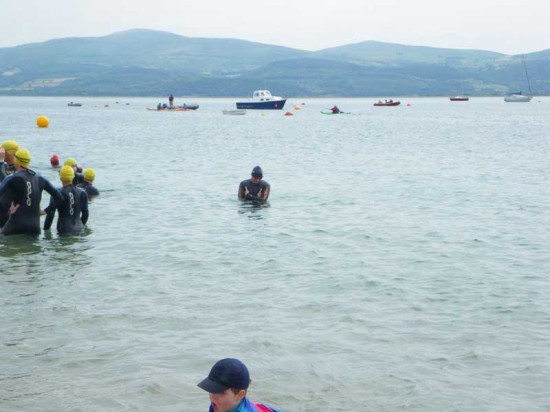 At least it makes me easy to spot I suppose. 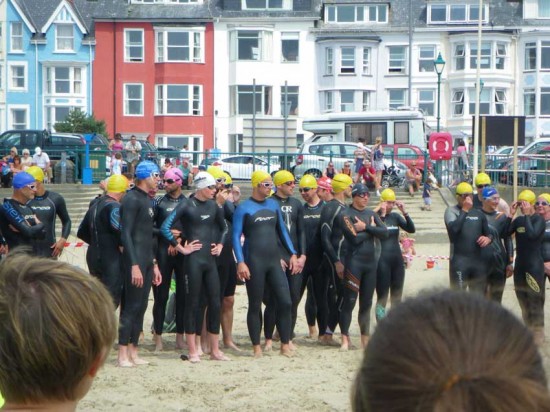 And then it was time for the ‘le Mans style’ start with a quick dash down the beach and a dive into the water .

And that was it, we were off into the clear waters of the Dyfi Estuary and swimming towards the first buoy. 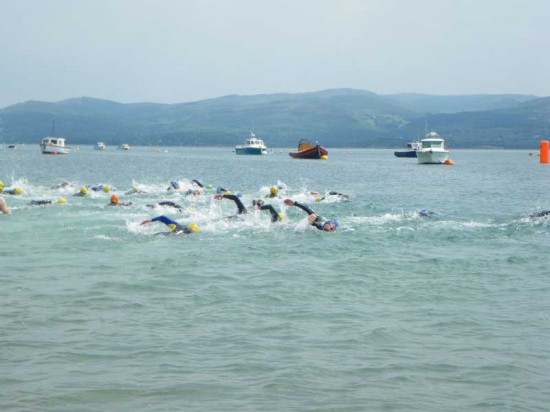 Towards the First Buoy

I didn’t try to get to the front straight away like I normally would, nor did I go out really hard for the first 50m or so. I wasn’t really ‘racing’ after all, I was just going for a swim so that Tom could do the bike and run but I soon found myself up at the pointy end with Arthur on one side of me and a young lad on the other. There was a bit of jostling for position at the first buoy but I wasn’t quite as assertive as I’d normally be so got punched a few times with flailing arms and let others take up position in front of me.

As we turned the buoy and headed up into the valley I found myself pulling away from the people around me and saw Helen out at the front a few metres ahead of me. I swam after her and caught her for a bit but as I pulled up alongside her she accidentally clobbered me in the face knocking my goggles off a little. They didn’t start leaking though so I carried on regardless. I let her go for a bit as I settled into my rhythm and could see her following close to the lead kayak just ahead of me. She gradually pulled away from me but I was feeling good. I wasn’t flat out and everything felt nice and I reached the turn-around point sooner than I had expected probably 50m or so behind Helen with no one else nearby. The tide was still coming in according to the direction of the boats so I decided to swim close to shore on the way back to avoid the main current. Although, it was now slack water so I don’t think there was much of a current anyway.

I don’t usually do 1500m swim as I only race sprint distance (750m) so I wasn’t sure how I’d do at a fastish pace over twice the distance, but I’d been staying well within myself and felt good as we turned around. I decided to pick up the pace a little as I was feeling so good but also then started really enjoying the swim. We were now in closer to the shoreline in shallower water and swimming over a rocky bed with seaweed, loads of little fish to watch and the odd jellyfish including a lovely Compass Jellyfish that particularly stood out as I glided past. I should probably have been concentrating on my swimming rather than the marine scenery but I was now loving it. The feeling of flying over the seabed as the rocks and seaweed rush below you is awesome, I just love it. I forgot to look where I was going and to sight every few strokes as I was just enjoying myself so much. Not a good idea as I nearly swam into a boat, but I avoided it, adjusted my course and continued on my way. I was now catching Helen a little but before long we were back at the jetty and the swim was over. Helen beat me out of the water but not by too much. 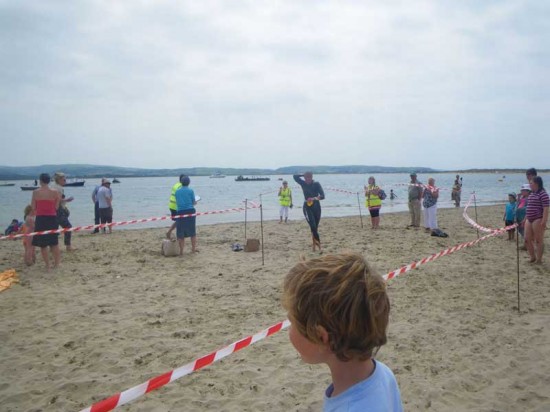 This surprised me as I expected her to be miles ahead. If I had tried to stay on her toes at the start I could probably have had a nice tow all the way around! I was out not long after though with a swim time of 20 minutes 40 seconds. 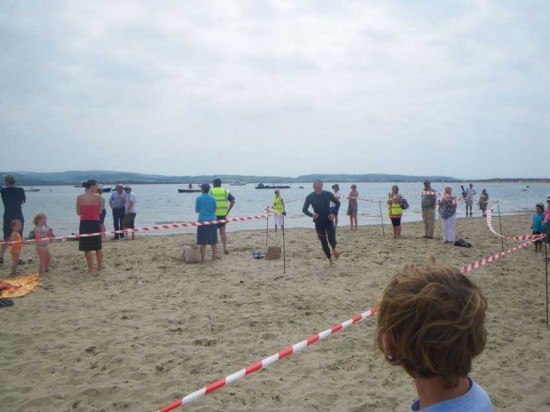 Swim Exit for Me

I ran across the sands, climbed up onto the prom and ran around to T1 where I handed over to Tom – My job here was done!

Tom was all ready to go so didn’t have to put on shoes and helmet. This meant he headed out onto the bike in first place while Helen was still in T1. I guess I couldn’t have set his race up much better than sending him out in first place. I then wandered back to beach waiting for the next swimmers to come along. They were quite way behind really but they soon came along and I was able to shout encouragement / abuse at them as they went past. It was quite a nice feeling to not have to do anything else.

Anna took photos of people as they exited the water. For some reason Arthur who I had expected to be close to me didn’t come up onto the Prom for ages, but I later discovered that he had chosen to take his wetsuit off at the waters edge, losing time there, but gaining it in the transition area.

Once everyone was out of the water I got back in for a little swim and then had some lunch on the beach with Anna and Morgan. We then chilled on the beach for a bit, had a paddle, bought and ice-cream and then headed off to the leisure centre in Machynlleth to see people finish. 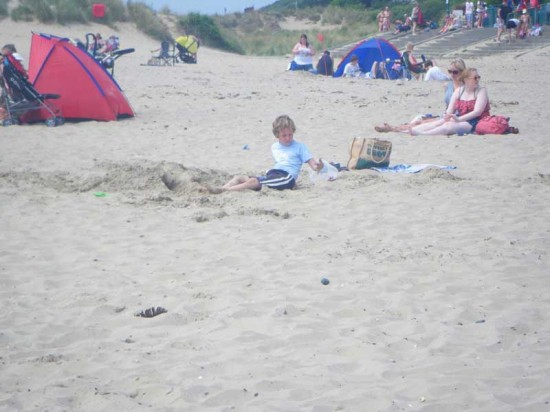 Playing on the Beach

It was quite a long afternoon waiting around in the sunshine for people to come across the line, but Morgan was off playing with some other children and Anna and I sat there chatting and relaxing. Tom had a really good bike and run and managed to finish quite a way up in the standings. We were however in the relay category which he managed to win so we stayed around for the presentations as well. We probably would have anyway as I always think its a shame when everyone leaves and the only people still there for the presentations are those that have won. It did however mean that we were there until about 5:30pm, so it had now been a a very long day, especially as it was all for a swim that took me 20 minutes! 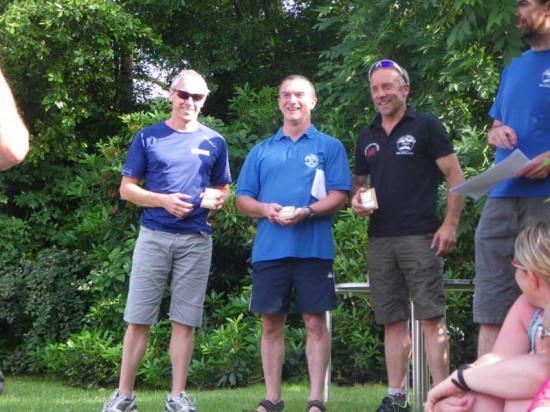 Nevermind, it was a nice day out, the swim was lovely and we had all had a good time. I was supposed to do a 55 minute run but when I saw the time nearly talked myself out of it. I didn’t though and headed off along the beach for a 10 minute easy warm up followed by 4x 6 minute hard intervals. I’m glad I did it in the end because despite the long day and the heat I managed to maintain my pace targets on all of the intervals, felt good and had a lovely run.

It was now however time for dinner and to relax on the sofa whilst catching up with the amazing ascent of Mont Ventoux by Chris Froome in the Tour de France. The end of a glorious weekend.