We’ve been raising plants from seed this year and most of them are coming on really well, so over the weekend one of the tasks was to pot them all on.

The beans and courgettes are quite large and healthy so they were planted on and new seeds sown in their place. The brocolli is doing OK but not quite so well and the tomatoes and chilli have been a bit of a disappointment so far. The marigolds and sunflowers are doing well though, as are the peas. In fact we have quite a few peas and Morgan has decided he wants to try to sell them. So, on Sunday he tried to make a killing from the tourists that are now ‘flocking’ to Borth and Ynyslas.

He made a little sign and put some newly potted on pea seedling out on a stand along with an honesty box. 50p for a pea seedling! Not bad really but he didn’t have any business at all from them. I’ve told him not to give up though so he’s going to keep trying and I think he needs to add some variety as well, so maybe some courgette and bean plants soon and possibly some nice flowering plants too.

Of course, in the summer he’ll be able to add garden produce to his stall in the form of Ynyslas grown peas, beans and courgettes and who knows, next year maybe even some Ynyslas Honey. 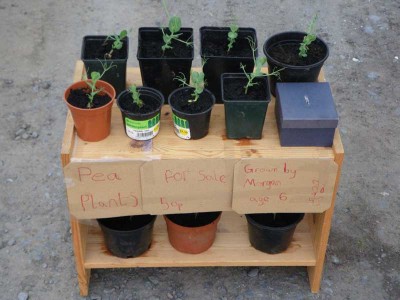