I had fun baking our Christmas cake over the weekend.

As I mentioned in an earlier blog post, I think I’m going to make this a Cole Family tradition, we’ll have big roast dinner on Thanksgiving weekend and bake a cake ready for Christmas.

It wasn’t quite a proper relaxing weekend in true holiday style but it was nice all the same. It wasn’t relaxing because I decided to have a bit of a clear out on Saturday morning. As always I ended up getting carried away just keep wanting to sort more and more out. You know how it goes, you clean out one cupboard, which means moving things to another cupboard which then prompts you to clear that one out as well. Before long I was in the attic, cleaning behind the fridge and even making new plans for storage in the porch! 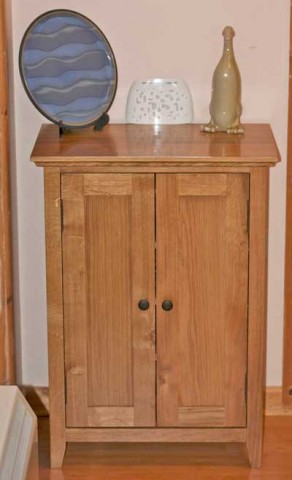 Show Cupboard – Much nicer that a dirty old fish tank.

All of this was brought on by the purchase and subsequent arrival of some new oak furniture.  We’ve actually ordered two new items from the Pine Shop in Borth. The first was a new shoe cupboard for the hall which is a Xmas present to us from Anna’s Mum. The second is a dressing table that will be used as a desk for Morgan in the dining room (to go with his secret Christmas present from us). The new shoe cupboard was due to arrive at 9:30am on Saturday which meant we had to clear out and get rid of the shelves and ‘frog tank’ that had been living uninhabited in the hallway ever since the last of my frogs died in September 2011. Once I’d started doing that, one thing led to another and I was on a cleaning and sorting mission. I now have plans for all sorts of things!

The new show cupboard in the hall is much nicer than the old frog tank though and the hall now looks quite sophisticated in comparison. The trouble is it has highlighted the fact that I’ve yet to sand and varnish the skirting bards and door frames so I shall have to add that to my list of things to do as well.

Anna hates it when I’m ‘tidying’, she isn’t anywhere near as bothered by a bit of disarray as I am and can quite easily live with it. I on the other hand would love everything to be spotless and for everything to have a place and be in it – mostly hidden away if possible (unless of course it is cool and worth showing off). Trouble is, I’m also a bit of a gadget freak and seem to have far too much stuff. Having so much stuff and wanting it all tidied away doesn’t necessarily go together, so we end up needing more and more storage, or having to have the occasional purge to make more room.

Needless to say, the cleaning and sorting brought on the comment ‘We’re going to need a bigger house!’ – In try Jaws style of course.

Once I’d finished the cleaning there was finally time to make a start on baking the Christmas Cake. I decided to follow a couple of recipes for this, making bits up a little as I went along and substituting the exact mix of fruit and nuts based on what we had available in the cupboard.

I decided to use quantities that would apparently bake a medium-sized cake. I know that doesn’t sound like my usual style as I’d usually go big, but Anna and Morgan don’t really like fruit cake so I guess this will be mainly eaten by me.

I’d mixed and soaked around 1.2kg of various dried fruits in ½ a litre of brandy, so by the time I added the nuts, and mixed up a cake batter consisting of 200g of dark brown sugar, 300g of butter, 300g of flour and 150g of ground almonds, the size of the cake was beginning to mount up. Flavours were enriched with more nuts, some deliciously sweet and rich molasses, spices and almond essence. In then end, when it came to mixing it altogether before putting it in the baking tin we had another ‘Jaws’ moment and I couldn’t resist shouting through to Anna “We’re gonna need a bigger bowl!”.

It all worked out in the end though and I made three cakes rather than just one. They have since been baked, cooled and fed with more alcohol. We’ve run out of brandy so I used some sherry that I found at the back of the cupboard. I’ve also found some cherry brandy though so I think I’ll use that to feed it over the next couple of weeks before starting to cover it first with marzipan and then with royal icing. We’ll then try to decorate in a festive fashion ready for Christmas Day.

I can’t wait to see what it turns out like, both aesthetically and taste-wise.