Another day of adventure thanks to Offa’s Dyke, and as usual most of it occurred on the journey there and back rather than on the run itself. It was always going to take longer to travel there and get the bus to my starting point that the run itself would take. I therefore got up at 4am so that I could set off to Hay-on-Wye at 5am. This gave me 15 minutes or so to spare to get the 7:04 bus to Hereford.

By the time I got to Hay-on-Wye I was dying for the toilet though so headed off to the public toilets that were right next to the car park. When I got there I discovered a locked door that needed 20p to open it. Typically, the car park had cost me £3.20 so I had just used my one and only 20p piece and couldn’t get into the toilets. With nothing open, there was nothing that I could do other than cross my legs and join the queue of people waiting for the bus.

I was surprised to see the bus was fairly busy so I took up a seat next to someone else and hoped I could hold on for the 1hr 20 minute it would take to get to Hereford. It was the most expensive bus of my round Wales run so far too at £7.80. At least I’d saved myself 20p on the toilet in Hay I guess!

The vibrations of the bus didn’t help with my predicament and with little to distract me all I could think about was how much I needed the toilet. A couple of times at near bursting point I almost jumped off the bus when it stopped. I resisted the temptation to do so as I would have then been stranded in the middle of nowhere with another bus not due for close to 3 hours.

50 minutes into the journey and with another half an hour to go I could take it no more. We were now stuck in traffic outside a large Tesco store. It must have a toilet in it so I jumped off with some urgency and ran into the shop, straight to the toilets where finally I could get some relief. I wasn’t sure quite where I was or how I’d get to the next bus but I hoped I was on the outskirts of Hereford. At that point though if I’d had to wait 3 hours for another bus that would have been preferable to what may have happened. Anything was better than being the strange looking old man in running tights wetting himself on public transport!

Thankfully I was on the outskirts of Hereford and about 3 miles from the bus station. I had about an hour to get so it was well within walking distance and time. So, off I set across Hereford. It was freezing! It had been minus 5ºC most of the way to Hay-on-Wye and although it was a little warmer than that here in the city it was still below freezing. I soon had all my layers on but I was still shivering. There was nothing for it but to run a little just to warm up. In the end, despite getting off the bus half an hour early and spending a bit of time in Tesco, I still arrived at the bus station just 10 minutes after the bus had done so. It was still there in fact. I now had a half hour wait for the next bus which would take me to Kington. It was a little late arriving, but at least it was warm once I got on. I was still shivering most of the way to Kington.

Once in Kington I took a quick trip to the toilet again (just in case) and then finally set off on my run. It was now just gone 10am, over 5 hours after I’d started my journey to get here! The run took me through the streets of Kington and then past Hergest Gardens and out onto the open, bracken covered slopes of the Hergest Ridge. Everything was frozen solid but the climb was steady and not too steep and the smooth wide grassy path made the running fairly easy. My body didn’t seem to know what was going on though. I was still shivering in the sub-zero temperatures but I was sweating at the same time with the effort. How messed up is that? What was my body doing? The one and only reason for sweating is to cool yourself down when you’re too hot. The only reason for shivering is to warm yourself up when you’re too cold. I was doing both at the same time, which is just weird.

The early morning sunshine had been mainly shrouded by clouds now and occasional snow flurries swept past. Nothing too much though just the odd snowflake really as I made my way up to the summit of Hergest Ridge. The views here opened out in all directions. The Radnor hills had patches of sunshine on them behind me to the north. To the West was a dark patchwork of the Radnor forest. I could see the Clee Hills and Malverns off to the East and far away to the south, the distinctive scarp edges of the Black Mountains – mountains that I would be approaching throughout todays run to Hay-on-Wye.

Hergest Ridge with the Black Mountains on the Horizon

As well as being a large elongated hill which traverses the border between England and Wales, Hergest Ridge is also the name of the second album by English multi-instrumentalist Mike Oldfield. Following the success of his famous Tubular Bells album, Oldfield sought peace and quiet nearby and named his successive album ‘Hergest Ridge’.

It was certainly quiet and peaceful up here today with just the biting easterly wind to keep me company and a few chilly looking sheep. I stopped briefly at the stand of Monkey Puzzle trees at the top, but not for long as it was freezing in the wind. 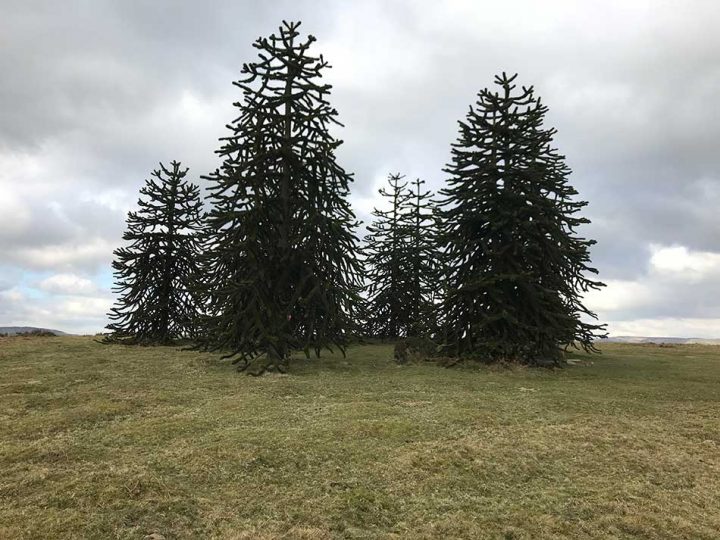 I continued my traverse of Hergest Ridge past several ponds that were frozen solid. 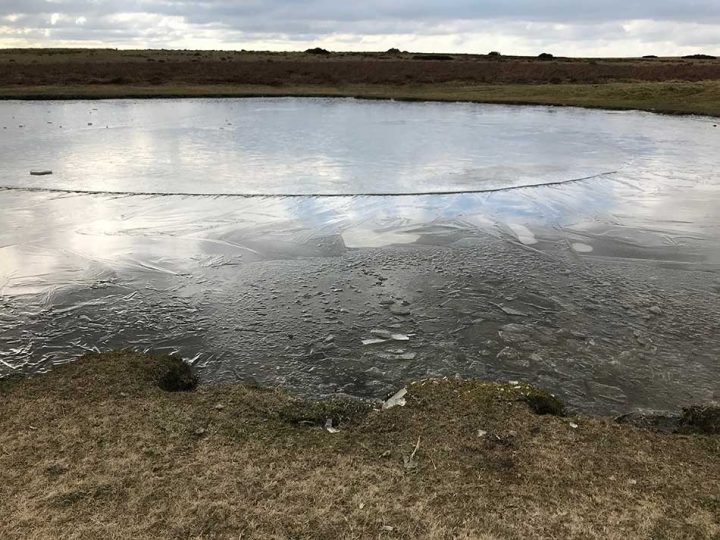 The ground beneath my feet was pretty unforgiving in the cold too. Normally it would be soft green grass to run over but today it was like concrete and I could feel ever little hump, bump and stone as I made my way along the ridge. I passed lone trees overlooking the Black Mountains in the distance. 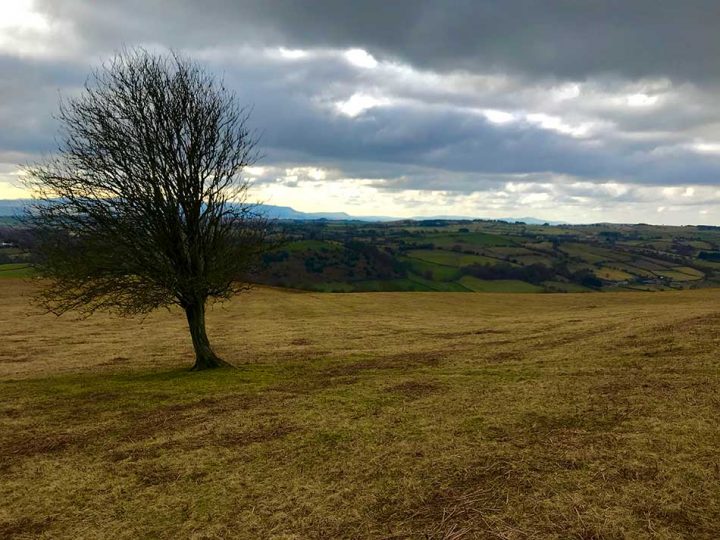 I then started the fast, easy descent into Gladestry. 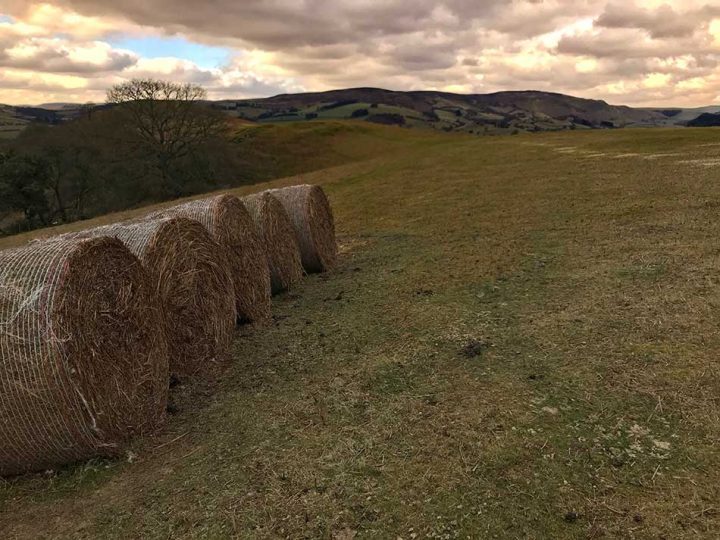 So far the cold had kept me going with as few stops as possible. The fairly easy terrain meant that I had been keeping up a god pace. The long descent into Gladestry only helped this.

I made my way through Gladestry and then seemed to double back on myself somewhat along various country lanes before heading south once more up a steep, icy farm track and then through a number of fields. These were all frozen solid so the footing was a little difficult. The hoof prints of sheep and cattle over the recent wet winter had chopped up the grass into a a pock-marked, corrugated surface. This was now frozen solid with no give so it was all too easy to twist an ankle or stumble over the ridges and holes. The tracks of tractors were even worse. 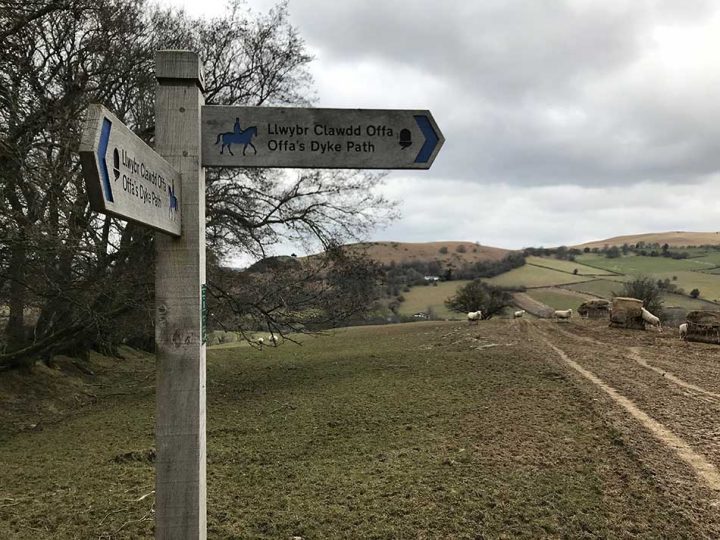 I made it unscathed though, ran along a leaf covered little path by Grove Farm, crossed another road and then headed uphill once again onto the slopes of Disgwylfa Hill.

Here I had more pleasant running over the fast, undulating open moorland. I was heading ever upward to the highest point as buzzards and Red Kites soared alongside me.

From the top I dropped steeply down, along a rocky lane to Newchurch. There wasn’t much going on in Newchurch. 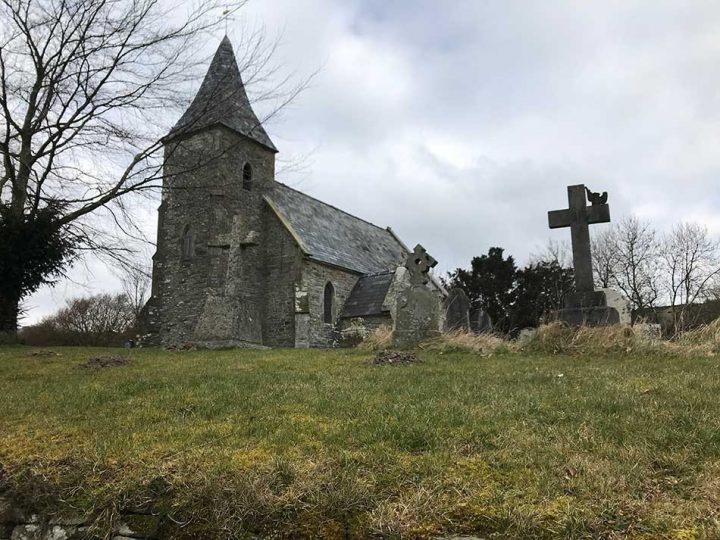 I stopped for a quick photo of the church and then headed off along country lanes again before heading out across more frozen farmland. One part of this section was quite tough due to the deeply rutted, frozen ground along what looked like an ancient drove road. It’s marked as Red Lane on the map and as far as I can tell was indeed a drove road between Newchurch and the Wye Valley.

On Towards the Wye Valley

More frozen fields and some easy road running and the Wye Valley was opening up in front of me. The slopes of the Black Mountains ahead were getting closer too. I descended along a series of roads and fields towards the Cabalfa Brook that runs beneath a mainly deciduous woodland along Cwm Bwllfa. This was a nice change to the open moorland and fields so far today. Things were warming up a little now as well with some mud present as pockets of ice melted in the sunshine. Birds chirped in the trees overhead and squirrels scampered off as I approached. 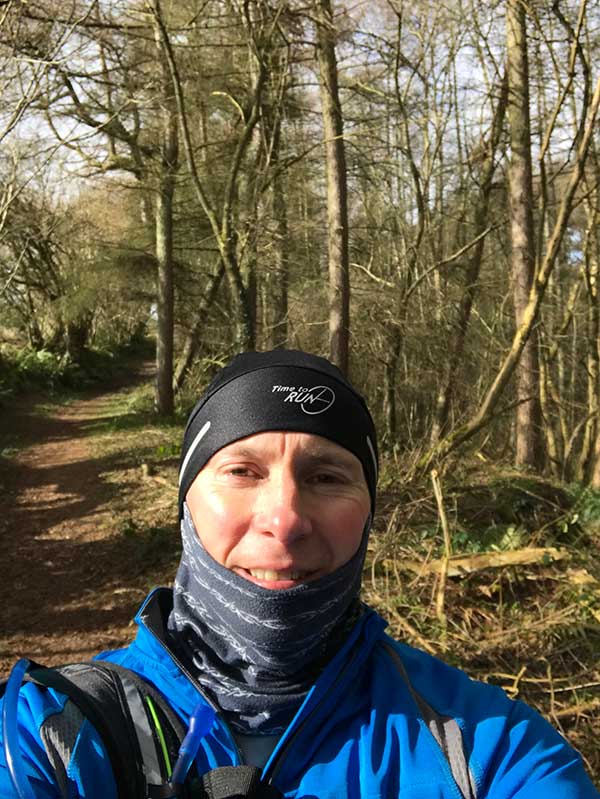 Eventually I emerged out of the Bettws Dingle woodland and onto the busy A438. I had to run a short distance long the road before crossing it and heading down onto the fertile fields of the Wye Valley floodplain.

The path now took me through various large, flat fields with the River Wye present a little way off to the left. I soon came to it’s banks though and ran alongside them for a while. 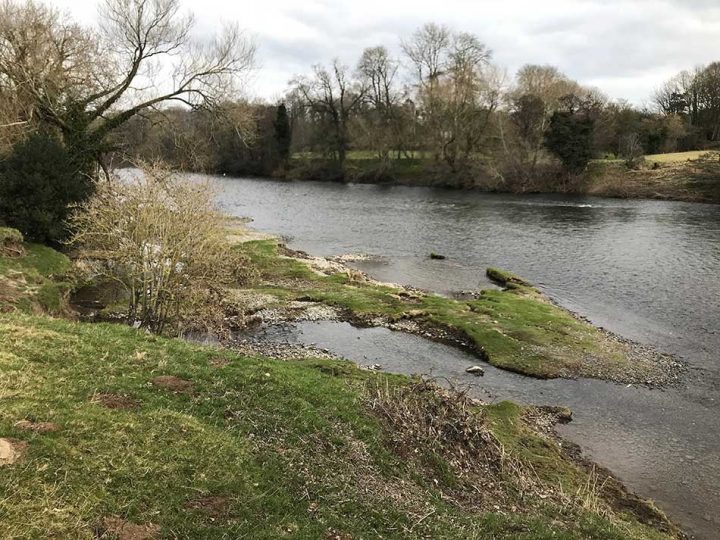 Banks of the Wye

I then headed up through a little woodland overlooking the river and the outskirts of Hay-on-Wye on the far banks. From here, it was just a quick run across a tall bridge over the River Wye and off through the streets of Hay to the car park where I’d left the van. 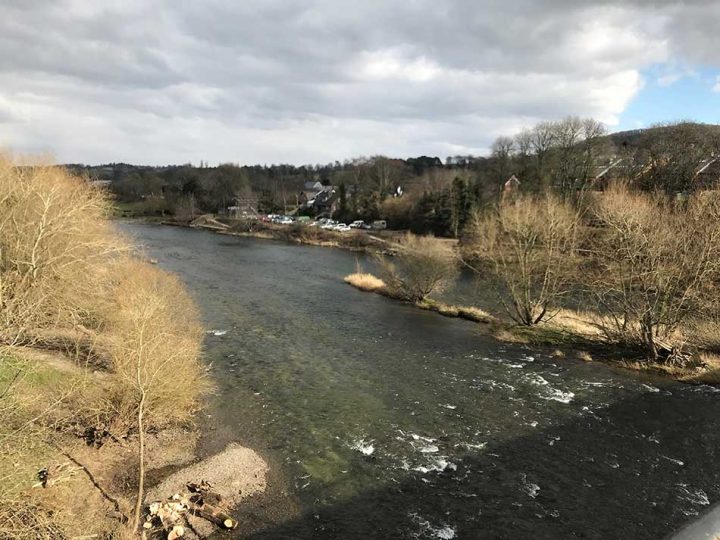 A quick text message to Anna to let her know I’d made it and it was time for a banana and a chocolate milkshake before starting the drive home. A couple of hours later I arrived home with another 15 miles or so of the Offa’s Dyke Path ticked off. Quite a short, easy section today but with 7 hours of driving / bus travel to accomplish it. Not to mention a 3 mile walk through Hereford thanks to my emergency toilet stop.

The next section of the path takes me up over the Black Mountains. With heavy snow and sub-zero temperatures forecast thanks to the ‘Beast from the East’ I may not be able to do it next week.