Tracking down the Andromeda Galaxy

After spending some working on the basics of piggyback astro-photography with some shots of Orion, I decided to turn my attention to the Andromeda Galaxy (M31).

I hadn’t been able to see this object yet, either with the naked eye or through the telescope, but I had a good idea of where it was. I therefore simply pointed the telescope complete with my piggyback mounted SLR camera at the right area of sky, and took a couple of photos.

Amazingly it worked…. The camera sensor had managed to pick up photons that I couldn’t see. These were photons from the Andromeda Galaxy that had travelled for 2,540,000 years at the speed of light to reach us here on Earth.

There it was, plain to see on the photo, the swirling mass of the spiral galaxy Andromeda, just as it was 2.54 million years ago. It wasn’t an amazing photo but it was without a doubt a photo of the Andromeda Galaxy, so I was pleased with that and hopefully as my technique improves so will the quality of the photos. 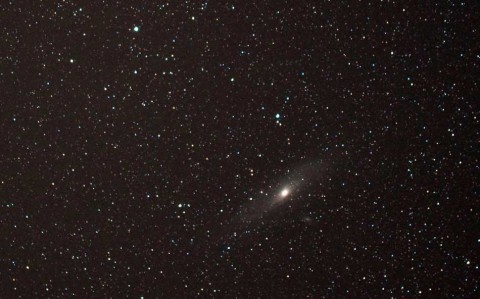 You can even see the Messier object M110 as well, which is a dwarf spheroidal galaxy that is a satellite of the Andromeda Galaxy.